Back in 2002, when I first started riding in Shanghai taxis on a regular basis, the flag-down rate was RMB 10, if I recall correctly. Back then, the dollar was pegged at $1 = RMB 8.2. So, back then, and today, too, that struck me as a hell of bargain: US$1.21 was less than a rush hour bus fare back in Minneapolis. Of course, to the majority of Shanghainese (per capita income at that time was well below US$10,000 per head), of course, it was still a luxury. But the beauty of sprawling Shanghai is scale: back then, as now, there were approximately 45,000 licensed taxis working the city (and a sizable fleet of pirate ones, too), and it couldn’t have been just the dollar-denominated riders, like me, employing them. 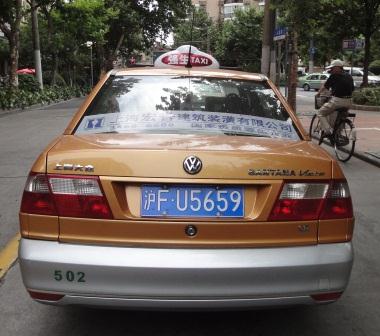 In 2006, the city fathers, under pressure from the taxi companies, taxi drivers, and – most important – oil prices, raised the flag-down rate to RMB 11, or US$1.35. The per kilometer charge also rose, by RMB .1, or roughly US$.01/km. As I recall, most of the Shanghai taxi riders I knew were more annoyed at the coins they’d receive in exchange for handing over RMB 20 notes to taxi drivers, than they were by the actual bite of the fare increase.

Two years later, in October 2009, fares were jacked again, to RMB 12 for flag-down. In other words, the price of just sitting down inside of a Shanghai  taxi went up just 20% in two years. Not insignificantly, the RMB appreciated significantly against the dollar during that same peior, lifting the dollar-adjusted fare to $1.76 (up 30% in four years).

Which brings us to Friday, and a new rate hike: RMB 1 was added to the flag-down fee, along with an RMB 1 fuel surcharge, adding up to a 17% total hike on the flag drop. Compared to five years ago, that’s a 40% hike – if you go by the local currency. And if, like me, you measure your income in dollars, it’s up roughly 80% since 2006.

Now look at it this way: the flag-drop rate for a New York City taxi is US$2.50. And if, as looks likely, the Shanghai government continues its every-two-years policy of taxi fare increases, and China’s government continues its revaluation of the RMB against the dollar … then, by 2013, it’ll be more expensive to sit down in a Shanghai taxi than a New York City taxi (incremental distance and waiting charges are still much higher in New York). Now, I’m keenly aware that Shanghai’s city fathers like to measure themselves – and their city – against New York as a means of judging whether they are, in fact, world class. But cost-of-living isn’t one of those measures, especially when your population is decades away from having disposable incomes on the scale of the average New Yorker’s.

Today China announced that its June inflation rate hit 6.4%, a 3-year high. This shouldn’t surprise anyone who shops in Shanghai. At least, for many middle class people, these costs are starting to press down on the improved living standards that thirty years of economic reforms have delivered to China’s middle-class. The proof, as in so many things, can be found in the words of the city’s taxi drivers. State-owned Shanghai Daily quotes several expressing concern that the fare hikes will hurt business (find me another city on earth where drivers would have reservations about a fare hike). My friend Rob Schmitz, Shanghai correspondent for Marketplace Radio, encountered similar sentiments the other day, during one of his own taxi rides. 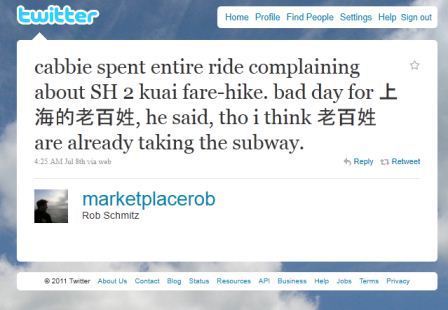