For various reasons known to my long-term readers, I receive news alerts whenever “scrap metal” pops up in a news story somewhere in the world. So, a week ago, I was going through the list (it’s not long), and I came across an unusual story of a group of professors in China who knelt down to halt the operations of a steel mill in Hubei Province. 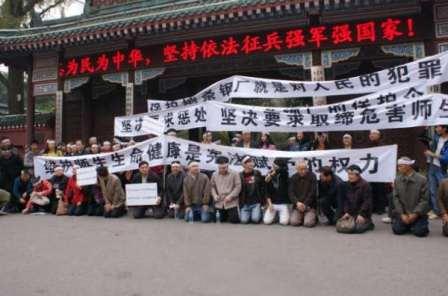 It’s a fascinating story, and the topic of my latest column at Bloomberg WorldView, “Wanting change, Chinese get on their knees.” The job – and the tendency – of reporters is to blow up relatively small incidents into metaphors for social currents, and so that’s what I attempt in this week’s piece. But whether you agree with my conclusions or not, I think you’ll find the story of the professors to be engaging in its own right. In China, it was an internet sensation, with leading voices speaking out on it. For example, Liu Yuan, a newspaper columnist quoted in the piece, wrote:

We should never propagate this kind of feudal signal. A hundred years has passed since the Revolution of 1911. If we think of ourselves as an ignorant common people as low as dirt, instead of as citizens of a modern society, officials will treat us with even more disregard.

In other news. This past week I’ve been traveling through the heart of China’s scrap recycling country, in large part for my forthcoming book on the globalization of waste and recycling. It’s remarkable how much China’s scrap recyclers have changed over the last decade, going from an industry based primarily on hand labor, to one that’s mechanizing at an astonishing rate. This, too, is a metaphor – a metaphor for a China that’s moving away from its low-end industrial origins. On Wednesday, I’m moderating a panel on this very topic at the World Recycling Forum in Hong Kong (Nov. 16). Nevermind me, though, the panelists themselves are the ones who really know what they’re talking about, including Li Jinhui of Tsinghua University (Beijing), my friends Michel Dubois of Recylux (Luxembourg) and Stephen Greer of Hartwell-Pacific and Oaktree Capital (Hong Kong), and Joe Yob of Creative Recycling Solutions (USA). It should be a great discussion, and if you’re in Hong Kong, and interested in the development of the Chinese recycling industry, that’s the place to be. Make sure to say hello.