I’m very excited to announce that I am participating in the Innovation Policy Summit at the 2012 Consumer Electronics Show in Las Vegas. This is a first for me (both visiting and participating), and I have to think that – among the 100,000+ attendees – I must know somebody. So, if you’re there, look me up. I’m participating in the “Product Refurbishment and Reuse in the Developing World: What is its Current and Future Role in the CE Industry?” panel on Thursday, at 15:00, in LVCC, North Hall N264. Among other topics, I’m going to offer a more nuanced view of Guiyu, China’s notorious electronics recycling town, and its role in the global re-use and refurbishment industry, than what’s typically presented in the media. The other panelists, including my pal Robin Ingenthron of Good Point Recycling in Vermont, are definitely worth hearing. Below, used, recovered microprocessors for sale at Guiyu’s electronics market (of the sort that I’ll be discussing). 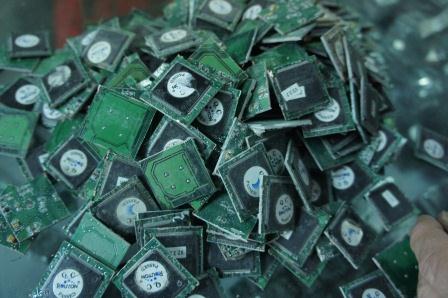 In other news … allow me to offer the strongest possible Shanghai Scrap recommendation for James Palmer’s outstanding, just-published “Heaven Cracks, Earth Shakes: The Tangshan Earthquake and the Death of Mao’s China.” It’s a beautifully written account of a) what it was like to live in a small Chinese city at the end of Mao’s reign; b) Mao’s court politics; c) how the Tangshan earthquake served as a catalyst (among others) to end Maoist excesses; e) an extraordinary and moving account of the quake and its aftermath. This is history, and it’s instructive. My highest recommendation.