This just in: I’ve turned in the manuscript to my first book, Junkyard Planet, to Bloomsbury Press.

Along the way, we’ll get up close and personal with the Chinese tycoons who recognized value in what rich countries throw away, bought it, processed it, and re-sold it back to those rich countries as new products. And we’ll also meet the people who do this work, not because it’s forced upon them, but because – in every country and every place – the collection and recycling of somebody else’s unwanted stuff is often the only route out of poverty, and into a business of one’s own. As just one example – I’ll introduce you to a remarkable dump grubber who started fighting for a living in the trash heaps at age 9, and today runs one of the world’s largest recycling businesses. Those dumps, however, weren’t located in Mumbai, Manilla, or Rio de Janeiro; rather, they were located in the heart of the American Midwest – the heart of what some folks call “The Saudi Arabia of Scrap.”

Junkyard Planet will be released by Bloomsbury Press next year. Below, the tentative Table of Contents as I turned it in last week. 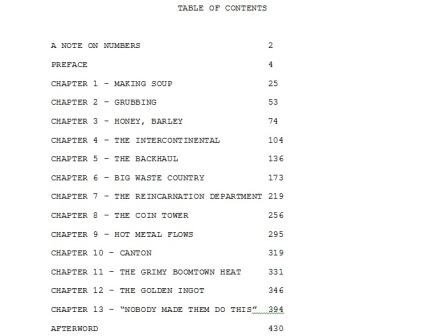 Over the coming weeks and months, I’m going to be re-starting the blog, with a renewed focus on photos, videos, and other extras from Junkyard Planet. I’ll also be editorializing a bit, defending a much-maligned and misunderstood industry. More soon!