This mostly dormant blog was started in 2007 with almost no agenda beyond plans to expand on my just-published profile of Shanghai’s Catholic bishop Aloysius Jin Luxian in the July/August 2007 issue of the Atlantic. I did that, and over the years I kept up with Jin – though I didn’t publish anything much beyond what the Atlantic piece contained.

Meanwhile, over the weekend I received the very sad news that Jin had passed away at 96. At that advanced age, no death can be called unexpected. But Jin was a man of unusual intellectual and physical vigor (he was traveling internationally, carrying his own bags, as recently as his 88th year), and it came as a bit of a surprise to me, and to many others who knew him, even though he’d been ailing for some time. He was just that kind of man – full of life, thoughtful, and – it can now be said – very, very funny.

On the occasion of his passing, I’ve written a short remembrance and biography that tells the tale of how I acquired Jin’s first passport in an online auction. Matt Schiavenza at the Atlantic’s new China channel was kind enough to publish it, here. As a very minor supplement to the piece, entitled, “Bishop Aloysius Jin Luxian’s Legacy for Religious Freedom in China,” here is the first page of the passport, as described over at the Atlantic. 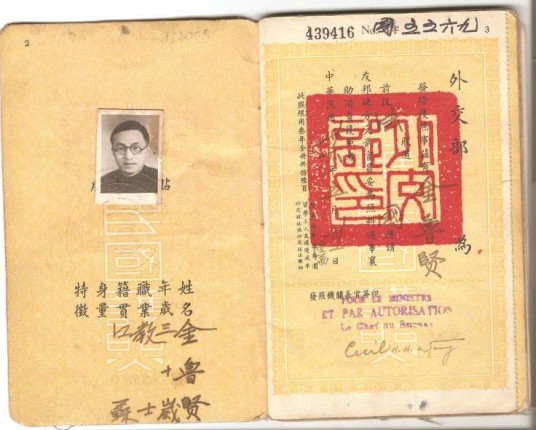