The other day I was sitting at the gate at Pudong Airport in Shanghai, downloading a couple of newspapers to my iPhone that I hoped to read during the flight. Of course, I’m keenly aware that use of phones of any kind on flights is prohibited so I did the responsible thing and right before takeoff I switched the iPhone into Airplane Mode. 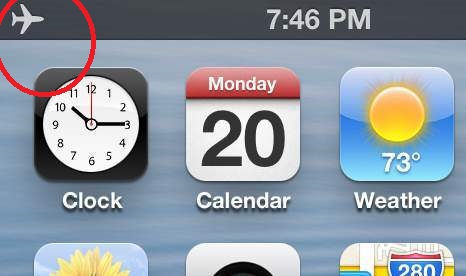 The mode, for those who don’t know or use it, disables all data transfers: blue tooth, wifi, cellular. The idea, allegedly, is that by disabling the data, the device does not have the potential to interfere with a plane’s allegedly delicate communications.

So – thirty minutes into the flight and comfortably at cruising altitude, I pulled out my phone, turned it one, and began reading my newspapers. Moments later, a flight attendant reached over and ordered me to shut it off. I held it out for her and pointed at the airplane logo indicating airplane mode, but she insisted it was prohibited. I asked to speak to another flight attendant, and was told the same thing. So I did as told and shut it off. What’s a traveler to do?

Later, I posted the experience to twitter and asked if a) this had happened to anyone else; and b) why? Indeed, if my followers are to be believed (and they are), then it appears airplane mode is banned on all Chinese airlines, and on all smartphones. Speculation was rife, but the best answer came from the Guardian’s Tania Branigan, who tweeted the very reasonable:

“because people will just leave them in standard mode and pretend to be in airplane mode, I suspect.”

For now, I’m going with that as the answer. But I’m open to additional theories – feel free to tweet them at me at @adamminter.

That noted, I’m not optimistic that we’ll get to the bottom of this, unfortunately. After all, we’re still at the theory stage of deciphering why we can’t read a kindle during take-off in the US. Mysteries of the air, I suppose.