It’s been nearly a month since my last update from the Junkyard Planet world tour (of sorts). Since then, we’ve been in the UK, Malaysia, Singapore … and now we’re back in Shanghai. To my ever-persistent surprise, Junkyard Planet continues to have legs – and get press. My hope, from the moment I wrote a proposal for the book, is that it would have mass market appeal. But it’s one thing to hope, and another altogether to learn that the book is available at WalMart. That’s a big step, and one that I certainly didn’t see coming.

At the same time, I continue to be gratified by the large number of independent booksellers, worldwide, who’ve chosen to offer Junkyard Planet to their customers. They’ve been key to its success, and I’ve enjoyed the appearances I’ve made – and will continue to make – at indie bookstores worldwide. Below, a photo of me and Kenny Leck, the owner of the amazing Books Actually in Singapore. What a fantastic place – not just a bookstore, but also a junk/antique shop filled with stuff that Kenny has personally scrounged up on his rounds in Singapore. Later this year, I’m going to head out grubbing with Kenny, and do an event at his shop as well. Can’t wait. In the meantime, if you get to Singapore, RUN – don’t walk – to Books Actually. It’s awesome. 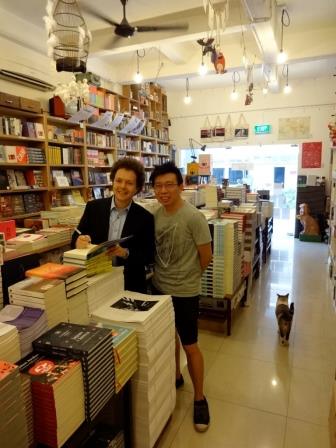 We’ve had terrific press in Singapore, including a feature profile in the Straits Times, the island’s biggest paper, that can be found here (the original is paywalled), and another piece in the Business Times. And there was some television: I appeared on Channel NewsAsia’s AM Live! show (sort of Good Morning America, for Singapore). Across the causeway in Malaysia, I was profiled by Kenny Mah for the Malay Mail and was the lucky beneficiary of a full-page books feature in The Star, Malaysia’s biggest English-language newspaper, by Natalie Heng.

Elsewhere on the Junkyard Planet, Victora Craw of news.com.au, Australia’s largest online news site, interviewed me about Junkyard Planet (the article was subsequently syndicated across Australian media). Meanwhile, I did a four-part interview with the wonderful Philippa Brant of the Lowy Interpreter, the official blog for Australia’s Lowy Institute for International Policy. The fourth part might be my favorite, as it offered me a chance to explain – concisely – how my thinking has evolved in regard to the junk trade over the years. And, of course, parts I, II, and III are also worth reading (if you can take any more of my thoughts on globalization and recycling). Finally, a scrapper in Melbourne has put together what is almost certainly the first fan video for Junkyard Planet. The ‘Melbourne Scrapper,’ as he’s known, has a great series of scrapping videos on youtube, so I’m more than a little pleased at his review, below..

Outside of Asia Pacific, perhaps my favorite recent coverage was a lengthy Spanish-language story published in Spain’s El Confidencial newspaper by Daniel Mendez in Beijing. And last, but certainly not least, is an interview I did with China’s Global Times newspaper. Readers who know my Bloomberg work, know that I’ve spent an inordinate volume of time writing about the Global Times, so it was fun to be featured in it.

There continues to be a lot of US-based coverage, with much of it migrating to blogs and small journals. There’s too much to list here, so for now I’ll point readers to terrific reviews in the Washington Independent Review of Books, another at the Hothouse website, and one more at dislocate, a publication run by students and staff in the MFA creative writing program at the University of Minnesota.

The next month of Junkyard Planet is going to be China-focused, with appearances at literary festivals in Shanghai, Beijing, and Chengdu, plus some additional appearances that I’ll soon announce via the events page on my blog. In April, I’ll be making some soon-to-be announced appearances back in the United States. I’ll also have some news on foreign language (ie, non-English) editions, as well as some television-related news later this spring.

Thanks, as always, to my long-time readers for making Junkyard Planet such a success. Looking forward to meeting more of you on the road.