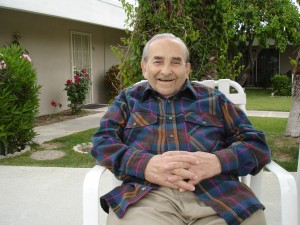 Toughest fella I ever knew, Max Zeman, my grandfather, passed away this weekend just 9 weeks short of his 100th birthday. For somebody who witnessed the worst of what the 20th century had to offer, he managed to hold onto one of the world’s best, warmest laughs and a firm appreciation for the little things. I’m talking about 5 feet of steely will that survived Nazis, sniper bullets, military hospitals, infections, displaced person camps – and a half century of Minnesota Vikings disappointments.

Below, two brief passages from the eulogy I wrote for him. The first concerns the sniper bullet that disabled him outside of Dresden at the end of World War II, and then the aftermath, including the discovery that his family had perished in the Holocaust. The second concerns what mattered most to him. If you knew Max, you loved him. If you didn’t, you would have.  He’s going to be missed.

The bullet to his knee occurred a few days before VE day, and that was bad luck. Then the string of bad luck contined and it became infected. But even worse was the fact that he was stuck behind Soviet, not American lines. The Americans had penicillin, the Soviets didn’t. So instead of receiving antibiotics, he was transported to a Polish military hospital and sealed into a body cast. For SIX WEEKS.

How did he spend the time?

On his back in a ward without air conditioning in the midst of a hot summer. Around him were other Polish soldiers – and they were vocal anti-Semites. Max survived, with scars on his back to prove the experience. Indeed, he not only survived, he was strong enough to heal, leave, and eventually make his way to the United States where he started a family.

From all this you’d think that Max would be a severe man. But there was so much soft there, and so much of it was fun. He occasionally revealed himself as Max Zeman the mischievous little boy who didn’t particularly relish school and – at age 13 – spent a few months working at a ski resort. Max Zeman, ski resort – who would’ve guessed that?

Then there was Max’s sense of style. He is the only man I’ve ever met who insisted that he had to comb – and I’m quoting – “my beautiful hair” without a hint of irony. I mean, who refers to “my beautiful hair?” Max Zeman, that’s who.

It wasn’t just his hair, either, that brought out the dandy in Max. I noticed over the years that nothing pleased him more than people telling him that he didn’t look his age. “Hardly any wrinkles” he told me not so long ago, pointing at his face. It was true, of course, and it spurred questions from his many visitors over the years. Like: How do you do it, Max? What’s the secret, Max? He’d always answer with a sheepish grin and shrug.

I loved this about him, in part because it reminded me that – despite the tragedies that marked the first third of his life – he hadn’t lost his strong sense of dignity, and pride in who he was. It would’ve been easy to let himself go after he found that the family he loved so much – a father, mother, sister, brother-in-law, niece, and so many others – had perished in the Holocaust. It would have been easy to give up after being disabled by a sniper’s bullet. But instead, he moved on, ever practical, and found his way to America. I’ve never doubted that the family he lost would beam with pride at the one he created.

I’m not sure that anyone but Max can truly understand the distances he traveled in his life, from a Jewish Lvov that was still lit with gaslights, to the Minnesota of today. Maybe we shouldn’t even try. But Max’s love of his family is something that anyone can understand. It’s the tribute we all owe him, the one identifiable, surviving legacy of all that he left behind in Lvov.

Each of us knew or experienced it in different ways. For me, it’ll always be Max and his smile, sitting on the sofa, patting the space next to him, saying, “Sit down for a while.”