In early January 2002, I spent a single night in Salt Lake City, Utah. The Olympics were a few weeks away, and the city streets were hung with Olympic banners. I was expecting more – a senses of anticipation, I suppose. But the banners were just about the extent of it. At least from my perch, there was no sense that a an event of international importance was about to take place in the city.

Yet that is not the feeling that I had this weekend in Beijing, where – over the last six months – the town’s look and feel has been transformed in ways obvious and otherwise (the transformation started years ago, long before my first visit to the city in 2002). Obvious, in building construction, the new roads, the cleaned-up cityscapes; otherwise, in a slightly displaced, insecure feeling similar to the way I feel when I’m told to wear a suit to dinner. 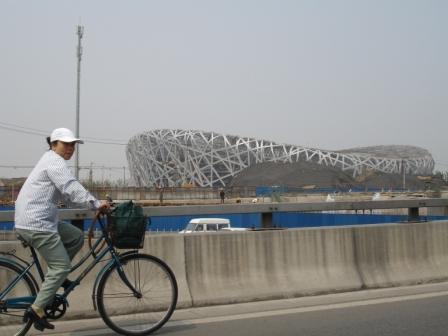 I thought about this latter feeling on my flight back to Shanghai, as I read Qin Xiaoying’s editorial, “How China won its bid for the 2008 Olympics” in the June 8 edition of China Daily, the state-owned and run English-language newspaper. According to his byline, Qin is a researcher with something called the China Foundation for International and Strategic Studies. A brief search of the web suggests that Qin is a prolific writer of editorials, many of which are concerned with China’s latent and emerging national greatness. Thus, in his June 8 editorial, Qin explains the real reason that Beijing was awarded the games in 2001:

…winning the bid to host the Olympic Games demonstrates the country’s rising standing among its world peers and its ever stronger national strength.

In their intensified rivalry to host the Games, countries are actually competing with one another in the fields of economic power, development potential, cultural tradition, education and science as well as international image.

This is an interesting and troublesome suggestion on a number of levels. First, it is worth noting that Beijing was awarded the Olympics over Istanbul, Osaka, Paris and Toronto – and with a few obvious exceptions (Toronto’s cultural tradition s don’t run deep, Paris has almost no development potential), each of those cities stands up well against Beijing. But that’s getting catty, and anyway, nobody – not even the Chinese government – believes that “international image” is why the Olympics were awarded to Beijing. On that basis, Paris wins, hands down.

In fact, on May 27, 2001, a few weeks before the Olympic Committee’s decision on the 2008 site, State-run People’s Daily ran a straight-forward story -based upon a Reuters poll of 32 sports editors in 28 countries – that outlined the more pragmatic reasons that China would likely win:

“It’s about time the country with the biggest population hosted the Olympics,” said Roger Crutchley of the Bangkok Post.

“The IOC will be very keen to totally embrace China in its Olympic tentacles,” said Joseph Romanos at the New Zealand Listener. “There is a lot of money to be made in China by the western world.”

The same story pointed out that the Olympic Committee had recently visited the five bidding cities, and evaluated their bids on technical factors, including facilities, transport, and environmental factors. National greatness, cultural tradition, etc., were not mentioned. Instead, in regard to the Beijing bid, the report said that:

“It is the commission’s belief that a Beijing Games would leave a unique legacy to China and to sport.”

This all seems quite plausible to me, and I wouldn’t be surprised if the notoriously rapacious Olympic Committee was also taken by the the extraordinary sums of money that the Chinese promised to spend on the event. Indeed, the Economist reports that, when all is said and done, China will have spent US$45 billion on the games – or 43% of the total sum of money spent on all Olympics since the Montreal games in 1976.

But back to Qin’s editorial. Half-way through, he begins to list the political and economic achievements of China in the late 1990s, culminating with a stable renminbi policy that helped stem the global damage of the 1997 Southeast Asian Financial crisis:

China’s role in maintaining regional economic stability was recognized by its neighbors and the world community. Against this background, Beijing outbid rival cities in 2001.

Nobody should be surprised that Beijing is using the 2008 games for its own propaganda purposes, and if it wants to make up just-so stories about how or why the Olympics were awarded to Beijing, nobody can stop it.

But what concerns me is the emerging fact that China’s leadership – and many of its citizens – seem hell-bent on believing this stuff. That is, they believe that the world sees the Beijing Olympics just as the Chinese want the world to see it: as a coronation.

And so, my mind wanders back to Salt Lake City in 2002, and the ambivalence I sensed in advance of that event, and later, during it. Americans – presumably, one of the more important intended audiences for China’s moment on the international stage – generally don’t care for international sporting competition, and their interest in the Olympics has been declining for years. Personally I find it hard to imagine that most Americans will accord Beijing any more respect than they currently accord, say, Atlanta, home of the preposterous 1996 games. Or Salt Lake City, for that matter.

At the root of all of this Olympic boosterism is, of course, a sense of national insecurity that Western diplomats will need to learn to appreciate – Olympics or not. Toward the end of his editorial, Qin writes:

Overseas media say that two events in the late 20th century and early 21st century will go down in history as events of historic significance for China. One was the smashing of the Gang of Four and launching of the reform and opening-up. The other is Beijing’s hosting the Games.

As a member of the overseas media, I can assure you that the latter event – the sporting one – is overshadowed by a different Beijing event that took place in 1989. But that’s a discussion for another time. What’s clear to me is that Qin’s essay – and the Chinese government’s interest in promoting the Olympics as an international coming-out party – is a clear outline of how China expects to be treated in coming years. The West – and the US, in particular, including those who watch the Olympics on tape delay – will have to deal with it.