[UPDATE 3/25: This post continues to generate hits, months after I first made it. So, since I’m in Beijing, here’s a new photo as of today. It become ever more impressive and imposing: 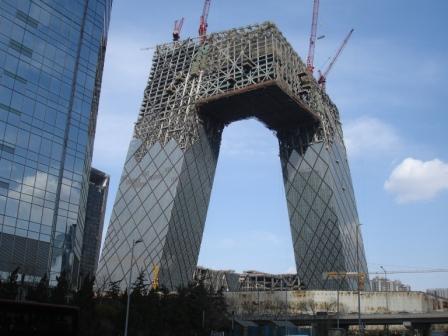 [UPDATE 11/19: Visitors looking for a more recent photo of the under-construction CCTV building in Beijing, click over to this fine image from Traveler’s Tales over at Far Eastern Economic Review’s site. I wish the image were mine, but it’s not – I haven’t been to Beijing in a few months. In the five months since posting the image below, this particular post still receives lots of daily hits from people googling for info on Rem’s great new building. Welcome to all of you – and I hope you’ll come back after you check out the image on Traveler’s Tales!]

As noted by many others, the looming 2008 Olympics has brought a star-chictectural boom to Beijing. The most notable example, of course, is the showy Olympic stadium – the “bird’s nest” – designed by Herzog & de Meuron (who should not be forgiven for their atrocious rock-em-sock-em-robot addition to the Walker Art Center in Minneapolis – but I digress).

However, to my eyes, no building is more exciting and adventurous than the new headquarters for China Central Television [CCTV] currently under-construction in the Central Business District. Created by Dutch master Rem Koolhaas, the design calls for a 230 meter high loop that bends over itself. It’s a lovely design, made even better by the way its highly engineered structural components soften the building’s glass facade. Below, a drawing of the structure from the Koolhaas firm, the Office for Metropolitan Architecture [OMA]: 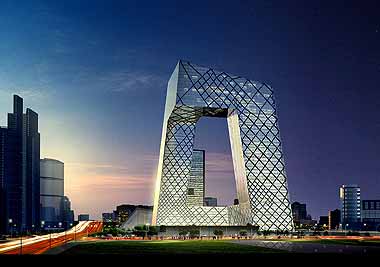 For me, one of the great recent pleasures of traveling to Beijing is the chance to see progress on this wonder of modern building, and – as is my tradition – this morning I took a walk by the site. Progress is steady, and my only regret is that I won’t be here to see how the army of workers manages to connect the loop: 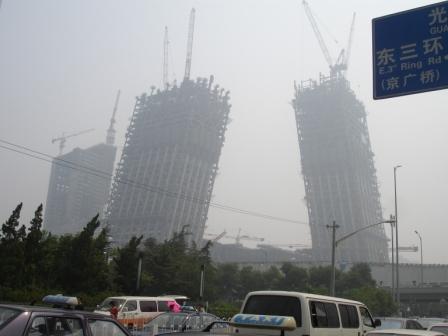