On Friday, what was supposed to be a leisurely walk through Hanoi’s old town, became an inadvertent tour of old Hanoi’s vast catalog of small Buddhist temples. Accompanied by a new friend from Luxembourg, we wandered the twisting maze of streets and alleys, each of which seemed to have a shrine hidden behind a gate. 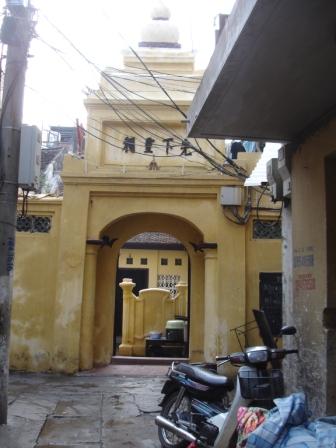 This came as no small surprise to me. Over the last couple of years, I have taken a keen interest in Chinese religion and the Chinese governmentâ€™s policies and regulations to control it. Though religious freedom is certainly growing in China, the process for officially registering places of worship (for any of the five government-reconized religions) tends to ensure that temples, churches and mosques are both large and relatively few (with notable exceptions). My understanding of the religious freedom situation in Vietnam – mostly derived from some quick google searches and a US State Department report suggested to me that it was not much different. That is, like China, Vietnam maintains government agencies with administrative control of organized religious activity, including the licensing of places of worship.

But if downtown/old Hanoi is any indication, the Vietnamese authorities have taken a less restrictive approach to the licensing of Buddhist temples, at least, than what is found in China. As we wandered in and out of small temple after small temple (often more than one on a single strret), mostly ignored by the (mostly) elderly women who seem to live and work in them, I found myself reminded of the relatively welcoming attitudes expressed in Mumbaia’s Hindu and Buddhist temples. Maybe, even, more welcoming than the Indians. 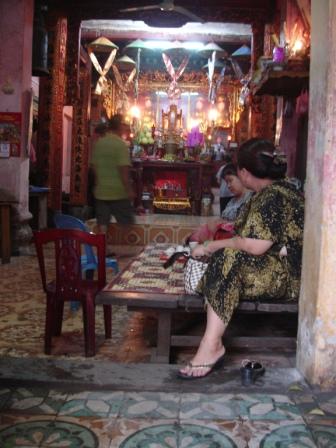 A couple of additional points. My friend, who had never before visited a temple in Asia, was immediately struck by the continuity between life in the temples and the streets outside. Clothes washing, eating, and even business occurred within the temples, and typically within meters of worshippers kneeling before an elaborate shrine. In one case, we found the shrine pressed up against the sidewalk itself. For different reasons, this situation is impossible to imagine in China, and (again, for much, much different reasons), in Europe and North America. Of course, I am not the first to note that developing countries often tend to have a more intimate, day-to-day relationship with religious activity, but I did find interesting to encounter the phenomenon in a country with a history of regulating, and repressing, religious activity.

Finally, we managed to find ourselves inside of what appeared to be a Buddhist preschool in an old French colonial building that must have been a theater at one time. The structure was open to the street, and the only occupant at the time was an ambivalent construction worker. Children’s toys and photos were scattered around a very modest shrine. In China, where open, organized religious education is still rare and very tightly controlled, such a situation would be impossible. 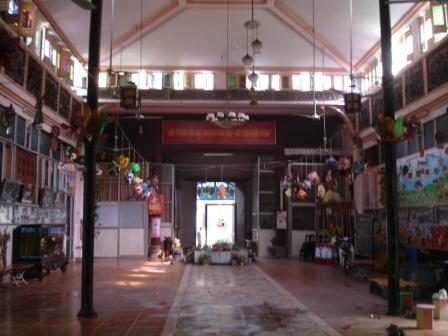