Over the last two weeks Pope Benedict XVI has issued what are likely to be viewed as two of the most consequential documents of his Papacy. On June 30, he issued his landmark letter to China’s Catholics; and on July 7 he issued his Motu Proprio de-restricting the use of the pre-concilliar traditional Latin liturgy (commonly referred to as the Latin Mass). I’ve had quite a bit to say about the former document, and I’ll have almost nothing to say about the latter (it is well beyond my area of expertise). Nevertheless, I’ve been meaning to post some information about the history of the use of the Chinese language in the mass in China, and it seems to me that the Motu Proprio offers the perfect opportunity to do so.

But first let me state that I don’t intend for this post to be taken as an argument for or against the Motu Proprio, the vernacular, Vatican II, or anything else that gets the blood flowing on either side of the pews. Quite simply, those are not my battles. Instead, I post this information as a matter of historic interest and, to a slightly lesser extent, contemporary perspective on the Church in China.

From the beginning of Chinese Catholicism in the 13th century, the mass was performed in Latin. Yet quite early on, in the 16th cenutry, the Jesuits decided that evangelization would be easier – if not more successful – if the Chinese language could be used in place of Latin. In 1615, the Jesuits received permission from Pope Paul V to use Chinese in the liturgy, and to ordain priests who had no knowledge of Latin. However, because of the ensuing Chinese Rites Controversey, this development was blocked for more than three centuries, until Pope Pius XII renewed permission in 1939. But World War II and the ascent of the Communists, blocked this development, too.

Anyway, in my profile of Shanghai’s Bishop Jin Luxian in the current issue of the Atlantic, I describe the process by which then-Father Jin accepted the rectorship of Shanghai’s government registered seminary in 1982 (the first to open in the post-Mao period). Shortly after accepting, Jin commissioned an architect to design the building. The structure was – and is – nothing architecturally interesting, yet several foreigners who were shown the plans in 1982 and 1983 distinctly recall that the chapel altar was unlike any they’d seen before. In effect, the plans called for a stone altar to be placed several feet from the back wall of the church, and then a false wooden backstop would connect the table to the wall. With the backstop in place, the altar was a classic pre-Vatican II design requiring the priests to turn away from the congregation (or, conversely, toward God, in leading the congregation) during the mass. But the backstop was a temporary device, and it could be removed, thus allowing priests to move behind it and turn toward the congregation. Jin didn’t know when, but he hoped that eventually a time would come when that backstop could be removed and the new form of the mass could be performed.

According to Father Thomas Law, a Hong Kong liturgist who played an important role in preparing the Chinese language liturgy used today throughout , the Chinese government preferred the older form of the mass “because the people didn’t understand it [Latin].” However, it was not only about language (otherwise, the older form could have just been spoken in Chinese). “If the priest turns toward the congregation and speaks Chinese, then suddenly it’s easier to give a homily in Chinese,” Law recalled. “And that wasn’t acceptable, either.” Jin was quite aware of both factors, yet he was also determined to introduce Vatican II (he translated the documents into Chinese) into the Chinese Catholic Church (due to the political events that began in the 1950s, the Chinese Church was still very much frozen in 1951).

Still, in the early and mid-1980s, Jin was in no position to challenge government policy on the language used in the mass. As it was, he had struggles enough just getting books and teachers for his seminary. But in 1988 he became bishop and his position was strengthened. In late summer 1989 he asked Father Law – who was then teaching at the Sheshan seminary – to begin quietly training Sheshan’s seminarians for a Chinese mass. Those preparations took roughly one month (the seminarians only knew the older rite), and on September 30, 1989, the backstop was finally removed from the seminary chapel altar. Father Joseph Zen, the future Cardinal Archbishop of Hong Kong, and a native of Shanghai, was then teaching alongside Law at Sheshan, and he was given the honor of being the celebrant at the historic event. Also present was the late Father Edward Malatesta, a Jesuit associated with the University of San Francisco.

When I spoke to him, Law recalled that the mass was extremely “emotional” and that some people “had tears afterwards.”

Over the next months and years, the new mass was celebrated intermittently – but with increasing frequency – in Sheshan, and then, slowly, in Shanghai’s few other churches. Significantly, though, the government did not approve the use of the new mass until 1992 – by which point Father Law had completed work on a Chinese language missal that met the standards of the Vatican (which approved it at a very high level), and Chinese congregations.

The following three photos of the historic mass were taken by Father Law, who kindly provided them to me last fall when I met with him in Hong Kong. 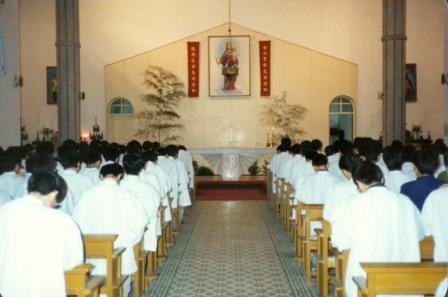 The scene from the chapel. Built in the mid-1980s, the Sheshan Seminary facility was the first Catholic seminary in post-Mao China. It was and is an “open” church facility, registered with and monitored by the government. The curriculum is partly determined by the government, but overseas clergy – such as the future Cardinal Archbishop Zen – have chosen to teach there, anyway. According to Father Law, there were approximately 100 seminarians and priests present for the mass. Among them were several future bishops, several of whom would be ordained with the pontifical mandate (the exact number is lost to history; we don’t know who, exactly, attended the event). 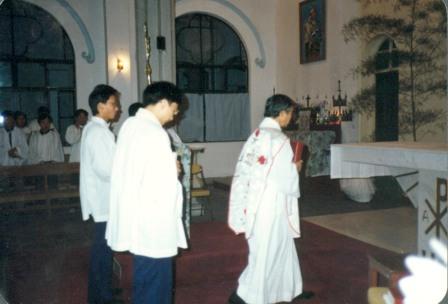 Father Joseph Zen, the future Cardinal Archbishop of Hong Kong, is accompanied by two unidentified attendants to the altar. 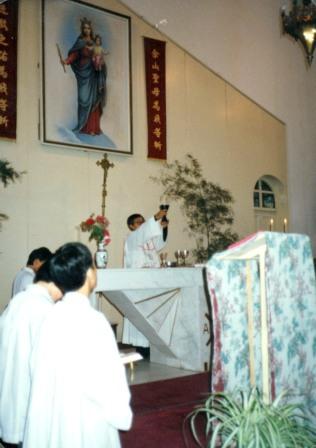 Again, Father Zen, now facing the congregation. Note the proximity of the altar to the wall. Prior to September 30, a removable wooden backstop had rendered it a traditional altar appropriate to the older form of the mass.

Before concluding this lengthy post, I should acknowledge that the Pope’s letter calls for May 24 to be a day “dedicated to the liturgical memorial of Our Lady, Help of Christians, who is venerated with great devotion at the Marian Shrine of Sheshan in Shanghai.” The seminary is located just below the shrine, and though the shrine’s importance to China’s Catholics long preceded the seminary, I suspect that the seminary and its many important roles over the last twenty-five years (approximately 400 priests have trained there) may also have played some role in its inclusion.