Sunday’s South China Morning Post had a story about an array of rumors which are driving people from the countryside into Guangdong Province’s thriving recycling industry [subscriber only]. The essence is here:

Zhang Wulong is an unlikely looking bounty hunter. A gawky 19-year-old in a shabby T-shirt and jeans, his face still bears the marks of teenage acne as he chatters excitedly about his hopes of stumbling across a secret fortune so huge that he will never have to work again.”I came here to try my luck,” he said, explaining why he left his home village 1,000km away in Hunan province with a group of young friends to come to Guangdong province. “That’s why we all came here. If we find what we’ve come here to find, it will be like winning the lottery.”

… The motivation is not the miserly wages, but instead a succession of fantastical stories that have spread like wildfire in recent months in rural provinces that migrant workers are finding bundles of [bank]notes accidentally thrown out with the trash by wealthy westerners.

Simon Parry, who wrote the story, attempts to find sociological significance in these stories, which he labels “apocryphal” and “rumors,” via an anthropologist: “an oddly distorted perspective on wealth creation and its morality among ordinary mainlanders who have seen so many fortunes apparently made overnight in the course of the country’s economic revolution.” However, on the all-important topic of who actually started the rumors, Parry dodges:

“… the crucial aspect was not who first told the story but why the story was so enthusiastically passed along from person to person.”

Nearly five years ago, on my first trip to Guangdong’s scrap yards, I heard the same rumors about banknotes being tossed into loads of overseas scrap metal and paper sent to China. When I inquired, one owner of a yard explained – with a smirk – that other yards (certainly not his!) would purposely slip US dollar bills and other valuables into sortable scrap so as to improve the overall productivity of the small army of labor necessary to sort through the mess that is – typically – an overseas load of mixed scrap paper and cardboard. The SCMP story didn’t provide any photos of what this kind of sorting looks like, so I’ll volunteer my own images to fill in the gap. Here, for example, is a sorting facility just outside of Zhengzhou, in Henan Province. Now, imagine how productivity would be improved if a few dollar bills were suddenly scattered among the old pizza boxes: 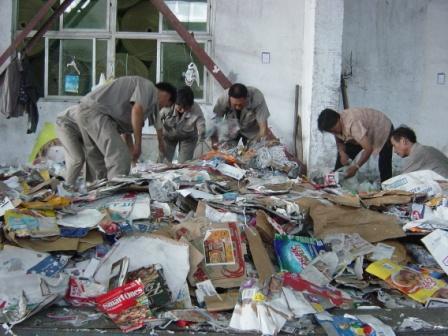 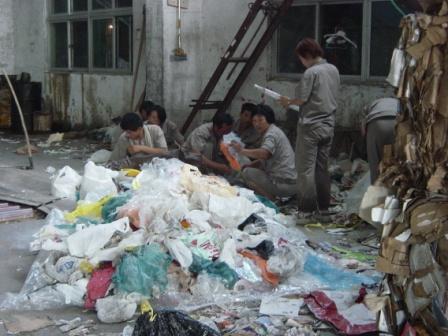 Below, one more photo, taken in a plant outside of Jinan, in Shandong Province. Here, the paper is Canadian and baled, and the workers are breaking up the bales. Most (if not all) scrap paper and cardboard shipped to China is baled, and thus I have to wonder how plant managers are able to slip banknotes – convincingly – into the bales … but that’s a topic for another day. 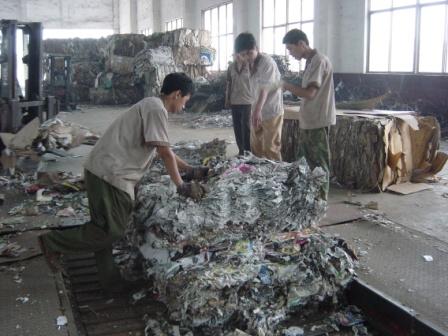