Northwest Flight 1652, scheduled to depart Washington National for Minneapolis at 6:36 AM this morning, left the gate on-time. But just as it turned toward the runway, a loud, hacking sound – kind of like a handsaw cutting through sheet metal – began vibrating through the cabin. From my seat – 14D -it felt like it was emanating from the right wing, and it continued for a solid five minutes before the captain announced that we would be returning to the gate so that a maintenance crew could cool off an overheating hydraulic pump.

Which we did, resulting in a roughly twenty minute delay.

Problem (presumably) fixed, the plane once again departed for the runway. And, once again, that loud, hacking sound coursed through the plane, lasting for roughly five minutes until the captain announced that the hydraulics were overheating again – possibly because they had been overfilled – and we were once again returning to the gate.

Once there, the captain announced that maintenance was going to replace the hydraulic pump with a new one. The replacement itself would require at least an hour – not counting the time necessary to find the part. Passengers were given the option to leave the plane, and several of us congregated outside, beside the gate windows, and watched as a two-man Northwest maintenance crew opened the right engine compartment and carefully removed the faulty pump. As they worked, a new pump arrived, and over the course of 90 minutes, the new part was installed. Below, a photo of the procedure (the two man crew was eventually supplemented by a third). 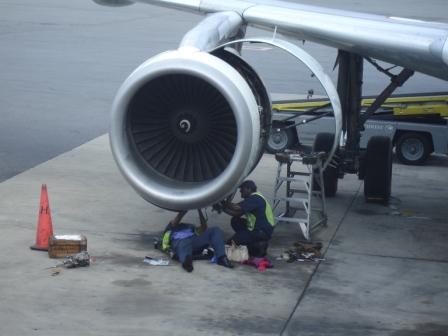 Finally, two hours into the repair, a quality control inspector arrived to check the work of the maintenance people. An engine test was performed and at 11:00 AM, 4.5 hours past the scheduled departure, passengers were asked to board flight 1652.

At 11:15, the plane taxied toward the runway. And at 11:20, the hacking vibrations began again, only more intense than before. The pilot pulled to the side of the runway, and after a ten minute wait announced that the plane needed to be returned to the gate for further maintenance.

No surprise, flight 1652 didn’t fly on August 1. Instead, it was tugged from the gate at 3:00 PM, presumably for a more intensive maintenance session.

I’m sure that Northwest Airlines – if asked – would officially depict the delay and cancellation of Flight 1652 as a maintenance issue. Which it was. But it also highlights, in the most uncomfortable terms, the inability of the airline’s maintenance department to identify and fix an engine problem. In the simplest terms, Northwest’s maintenance team got this engine problem totally wrong, going so far as to replace a part that apparently had no role in the overheating that the pilots claimed to have sensed from the cockpit. This is akin to performing a kidney transplant on the basis of a misdiagnosed flu. For me, personally, it is both astonishing and frightening that Northwest would feel comfortable sending this injured plane back to the runway – three times over four hours.

Does this have wider implications for Northwest flights originating out of Washington, D.C.? Who knows? For sure, I wasn’t getting back on the 1652 plane (I took a later Northwest flight – and landed safely). But I can’t help but wonder if Northwest’s decision to hire replacement mechanics for its striking mechanics in 2005 is still consequential. Then again, the Quality Control supervisor who signed off on the botched – repair – is unlikely to be union or a replacement worker, so I might be wrong.

[UPDATE 8/6/07: I’ve received several emails pointing out that the maintenance workers in the photo are not Northwest mechanics, but are instead Northwest contractors. According to one of these emails, Northwest only uses its own mechanics at hubs (Minneapolis, Detroit, Memphis, etc.), and otherwise outsources. If I recall correctly, the maintenance workers in D.C. were wearing shirts emblazoned with “Swissport.” According to a quick google search, Swissport “provides passenger and ramp handling at over 110 stations world wide and serves 70 million passengers per year.” The Swissport website lists numerous services that it can provide an airline, but aircraft maintenance is not among them.

Perhaps a reader could comment on Swissport as a maintenance provider. Also, I’d be very interested to know how Northwest handles maintenance at its international operations, particularly in Asia.]