Count me among those not celebrating Beijing’s late acknowledgment (as in, this week) that the Three Gorges Dam is an environmental and human catastrophe. According to today’s China Daily story:

Not bad for a project that hasn’t been completed yet. But as bad as that reads, there’s even more. As I reported in the July 2005 issue of Scientific American [subscriber only], the placid waters of the Three Gorges Dam are directly responsible for a spike in schistosomiasis infections around Poyang Lake (China’s largest). Though relatively unknown in the developed world (except among backpackers), schistosomiasis is one of the world’s most common and feared parasitic diseases (symptoms are initially fever, aches and pains. however, if left untreated, severe liver and other organ damage can occur). In 2005, when I reported the SciAm article, China had 850,000 total cases (likely, an under-count) and a researcher from the Shanghai-based China Institute for Parasitic Disease told me that it was “the most serious parasitic disease situation in China.”

[Ironically, one of the great (and unknown) successes of China’s early Communist government in the 1950s was the control and near eradication of schisto (in 1949 there were 12 million Chinese cases).]

I don’t have up-to-date figures on infections, but my interview notes with Dr. George Davis of George Washington University, one of the world’s great experts on water-borne parasitic diseases, suggested no optimism that the situation would improve – so long as there was a dam. More ominous, Davis was and is quite certain that the schisto situation will actually get much worse in coming decades as a result of intermixing populations of schisto parasites that had previously been separated by the swirling Three Gorges. Now, with populations free to mix, genetic diversity will increase, and likely lead to more virulent versions of the parasite. “That’s very dangerous,” Davis told me.

Below, a photo of Davis’s May 2005 data collection expedition into the mountains of Sichuan Province near Xichang. Up to 60% of the residents of this region were (are?) infected with schistosomiasis. 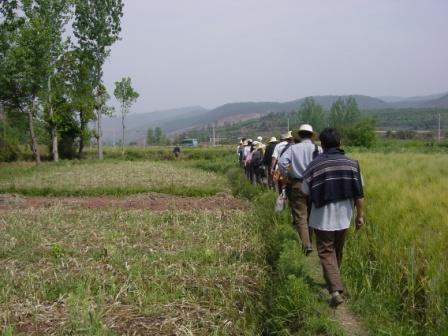