I’ve begun to think that someone at China Daily has a rather wry sense of humor. Case in point: a very brief photo essay that ran in Friday’s online edition. Located at the top of the China section (still on the home page) was a link that connected to this headline, photo, and caption: 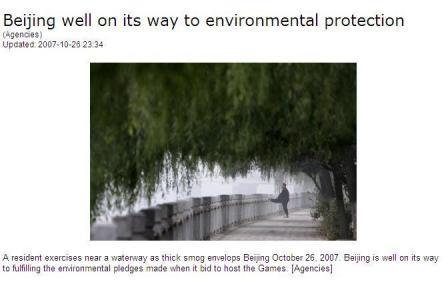 I reduced the size of the photo for formatting purposes, so in case the text is too small, here it is again: “A resident exercises near a waterway as thick smog envelops Beijing October 26, 2007. Beijing is well on its way to fulfilling the environmental pledges made when it bid to host the Games. [Agencies]“

Now, that’s pretty funny. But it was only when I clicked over to the second photo in the essay that I decided that somebody was making a conscious effort at satire. 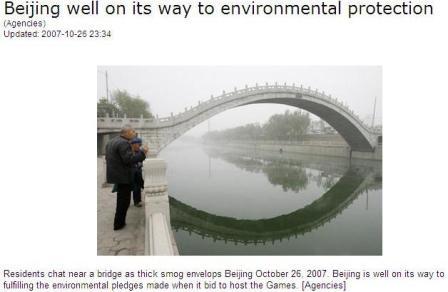 That is: “Residents chat near a bridge as thick smog envelops Beijing October 26, 2007. Beijing is well on its way to fulfilling the environmental pledges made when it bid to host the games. [Agencies]”

There are two obvious explanations here. Either the photo editor posted the two images with honest, single-sentence captions that were later appended (by an “editor”) to include the business about fulfilling environmental pledges OR some brave (and comic) soul in the photo department decided to make a point about the increasingly absurd efforts to spin Beijing’s Olympic air quality and somehow managed to get it posted to the site.

[a third possibility, just suggested to me, is that the essay and its captions are “a desperate cry for help.”]

Whatever the truth, I think it’s one of the funniest things ever run in China Daily, and this afternoon I spent the better of twenty minutes making up new captions over the phone with a friend in Beijing (“Residents try resuscitate a neighbor in the midst of an asthmatic attack. Beijing is well on its way to fulfilling the environmental pledges made when it bid to host the games.” “Low visibility sends A380 into skyscraper. Beijing is well on its way etc etc etc”).

[Update 10/29: Much thanks to Black and White Cat and his comment (below) partly answering the question posed in the title of this post. Apparently, the photos and the first sentence of their accompanying captions were provided by Reuters, which has a set of them available here. The second sentence, then, was added by China Daily. Mystery partly solved.

But I have to ask: why would China Daily run these images in the first place? Even with the party-line caption modifier? Maybe I’m too enamored with the idea, but I’m still holding onto hope that somebody with a sense-of-humor appended that second sentence to the one-sentence captions. Which is, of course, a possible corollary to the desperate cry for help theory. Or, as nanheyangrouchuan puts it in a another comment (also below): “… a sign that that party mouthpiece is getting fed up with towing the line about this particular subject. Kinda like US troops in Iraq flying the flag upside down …”]