Before toys and toothpaste became the favored buzzwords for all that is (arguably) wrong with outsourcing to China, “Nike sweatshop” held the crown, serving – as a proxy – for the mass exodus of global footwear manufacturers to Chinese factories. It’s an old story, and it isn’t changing, either: in 2006, 8 of every 10 pairs of shoes sold in the United States were made in China.

Shoes, more than most products, seem to invoke a sort of economic nostalgia (and nationalism) on the part of anti-globalization activists and connoisseurs of high-end leather goods. In Europe -and, particularly, in Italy – the idea of replacing the sepia-toned village shoemaker (preferably based in a mountain village) with an automated factory in Wenzhou is nothing short of economic treason. Which is, perhaps, one reason that the EU recently took the extreme step of imposing some pretty serious duties on Chinese shoe imports.

I should note that economic nationalism is no less strong in the US, and that’s why I’m fairly sure that somebody – sooner or later – is going to get worked up about the outsourcing of horseshoes. Below, a photo of a Chinese worker completing work on a stamping mold that will – I’m told – produce 1 million horse shoes annually for export to the United States. 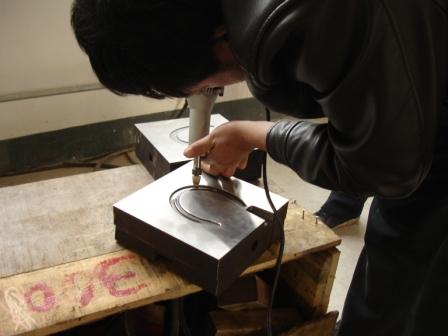 Before going further with this, I should note that my visit to this factory was an accident of sorts; I was actually visiting a neighboring facility when I was invited to take a look at this one by someone other than the contracting American horseshoe company. Thus, out of respect for the individuals who allowed me into the facility I will not post any identifying information about the factory, the contractor, or its location – other than to say that it is located in a Northern Chinese manufacturing center.

I have very little knowledge of machine tools, their operation, or their output capacity. That said, I do know that Chinese machine tools can cost as little as 20% of the foreign-manufactured tools that they are often copied from. Of course, the copies are not nearly as efficient or well-built as the originals, and they are prone to much more frequent breakdowns. But in China, where even highly trained and competent maintenance engineers can be hired for roughly US$200/month, maintenance costs – including lost time costs – are simply not the serious consideration that they would be in Europe or the United States (this is a frequently misunderstood and overlooked Chinese manufacturing cost advantage). Below, the two forging machines that will produce the US horseshoes. 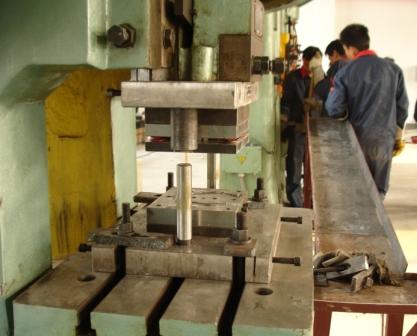 (I apologize for the poor quality of these images. I had very little time to take these, and I was uncertain as to whether I was welcome to take them at all.) 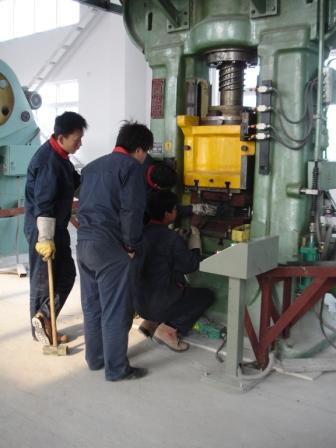 A brief search of the web indicates that the outsourcing of horseshoes to China is nothing new. Shandong Tongli S&T in Qingdao claims to be the “biggest manufacturer and supplier” of horseshoes in China, with total manufacturing capacity of 5.5 million pieces per year, and a 100% export business (including the US and Europe). The plant that I visited was small by comparison.

I know next to nothing about horseshoes, and so I really have no way to judge whether the quality of the Chinese horseshoes compares to those manufactured in Europe or the United States. If hardness (and that’s a technical measure) is an important horseshoe spec (and I bet that it is), then Chinese manufacturers will likely have trouble sourcing metal to meet that spec on a consistent basis. I know of several American manufacturers who have had difficulty obtaining outsourced products that meet precise hardness guidelines. Below, the results of initial test runs on the new forging machines. These shoes are not final products, but I’d be curious to have someone knowledgeable comment on them. 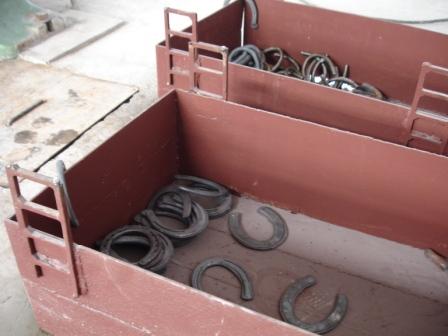 This morning I spent a little bit of time trying to get obtain statistics on the worldwide horseshoe industry (really, I did), but without much success. Obviously, it would be very interesting to know what percentage of the world’s horseshoes are currently being manufactured in China. My guess – on the basis of this factory – is that it is a growing number, and that there is little to nothing that US or European manufacturers can do about it. Tariffs of the sort that the EU imposed on (human) footwear are unlikely to be proposed for, much less stick to (horse) footwear. So long as China produces low-cost machine tools, and labor rates for machine tool operators and maintenance remain at fractional rates of the developed world, this industry (which is not propped up by the Chinese government) will thrive outside of the market in which it sells.