A couple of weeks ago Jim Fallows mentioned that he is snapping a daily photo of the Beijing sky(line) from his apartment window for “later chronicling purposes to see how and when the campaign to clean up the air [in advance of the Olympics] finally kicked in.” That’s a fine idea. Fallows isn’t posting the photos now. But I hope that he will – come next August – post them in some kind of chronology.

The Fallows Project got me thinking: is anybody (as in, “any China blog”) chronicling the air quality situation in the other six Chinese cities that will host Olympic events? Shenyang, in particular (pun intended), is notorious for its poor air quality, and Tianjin isn’t much better. As it happens, this week I had the chance to visit two of the six host cities, and so – for later chronicling purposes – I present photos of the current air quality situation in them.

First, Tianjin (120 kilometers southeast of Beijing), which is scheduled to host football matches. Below, a photo of the airport tarmac at roughly 10:00 AM, Tuesday. 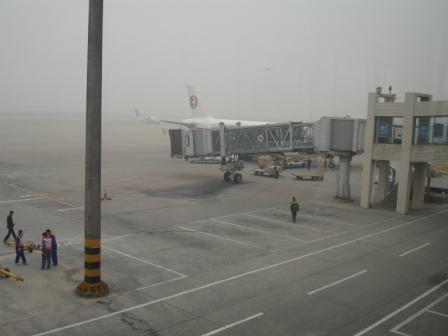 I choose a tarmac photo because – in theory, at least – airports are generally built upon wide, flat plains providing many kilometers of visibility. On Tuesday such visibility was not available.

Below, one more photo of Tianjin’s airport, this time to give a sense of the pollution’s density. That’s the main terminal in the distance – roughly 200 meters, I’d say. Like many Chinese cities, Tianjin’s population burns wood and coal for heat during the winter months – and it was plenty cold when I was there. Also, Tianjin has a significant manufacturing sector, lots of cars, and – most important – it is downwind from Shanxi Province,* the beating heart of China’s coal country, and home to yet another thriving manufacturing sector. 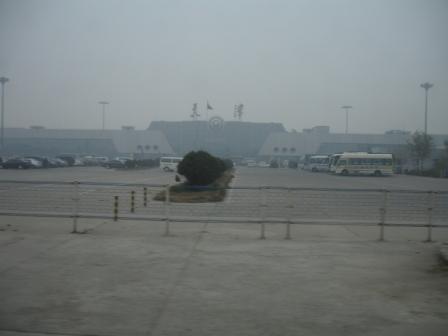 [Update 11/19: As mentioned in a comment below, the China Hope Live blog has some interesting before/after contrast photos of air conditions in Tianjin, taken in June.]

Later on Tuesday I visited Qinhuangdao (roughly 250 kilomters northeast of Tianjin), which will also host Olympic football matches in 2008. There I found something quite unexpected: clean air! Of course, it helps that Qinhuangdao is a relatively small coastal city bordered by picturesque mountains that probably block pollution generated in the west (I’m guessing here). But let’s give credit where credit is due. Below, a photo of the eastern terminus of the Great Wall (!), at Qinhuangdao, taken around 3:00 PM on Tuesday. 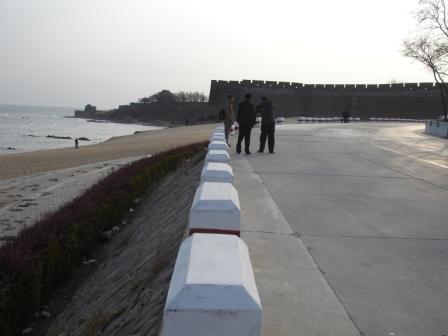 Looks pretty clean to me! Below, a photo from the same spot, pointing west, toward Qinhuangdao’s port. I’d guess that the distance across the water is roughly 2 km. Maybe more. 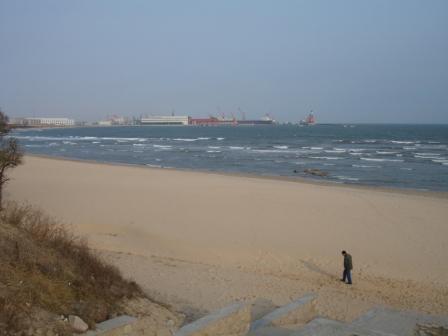 As it happens, I have photos of Shenyang’s smog (bad) from a couple of months ago. But that’s a couple of months ago, and I want to be fair about this – so I’ll wait until my next trip to post a “current status” report. As for the other three Olympic host cities – Shanghai, Hong Kong, and Qingdao – I can state that Shanghai was clear today. I would take a photo, but it’s night here, so that will have to wait. If anybody out there will share photos of Qingdao or Hong Kong, please let me know, and I’ll post them.

I returned to Tianjin that same evening, driving mostly in the darkness – and the drive was informative. During the day, the highways between Tianjin and Qinhuangdao are mostly empty of trucks, and the few factories that line them appear to be idle. The smokestacks are idle, at least. But at night, it seems, the beasts come out: those empty highways are suddenly packed with dangerously overloaded trucks (my colleague and I saw one loaded with seven steel coils, each weighing at least 10,000 kg!!!); and those idle smokestacks spew somewhat perceptible white clouds into the black night (White flags of winter chimneys/waving truce against the moon …). Perhaps Hebei Province’s police and environmental inspectors only work the day shift.

*While in Tianjin, I had a conversation with the general manager of a machine shop who told me that he expects the air quality situation to begin improving soon because – according to him – “the government” is beginning to shut down polluting factories in Shanxi Province, which is reportedly the source of much of the pollution in Beijing and Tianjin. According to this GM, many of his former sourcing partners in Taiyuan are now shut down, and his colleagues in those companies are blaming the Olympics. I don’t know whether or not this is true, but at some point it certainly WILL be true – if Beijing follows through on its promises. Clean air may be one of the consequences of such a policy – but I can think of many more that may be more immediate.