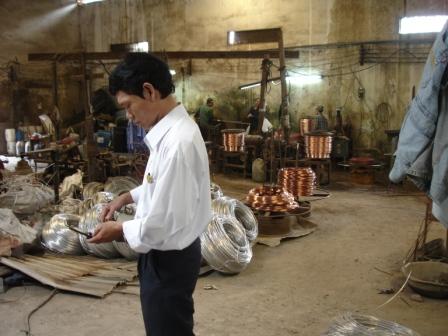 Over the last few years I’ve had the benefit of two editors – Kent Kiser at Scrap, and Manfred Beck at Recycling International – who have trusted me to spend extended periods of time (and money) investigating the flow of waste and recyclables through Asian developing countries. It’s been an honor and an education, and over the next year I plan to assemble those collected experiences into a format that (I hope!) conveys them to readers interested in one of the lesser understood aspects of globalization.

And now, that part II excerpt:

I am seated on the back of a motorcycle, holding tightly to the waist of Tien Nguyen, a weathered 40-year-old Vietnamese scrap trader with 20 years of experience in the sweaty, cramped markets of Ho Chi Minh City. All around us, other motorcycles bob and weave through the packed boulevards of the bustling city, somehow never colliding. Mr Tien turns down alleys, emerges onto new boulevards, warns me to hold my nose as we approach a drainage ditch, and then emerges into a muddy, unpaved industrial zone lined by small-scale manufacturers and countless little sheds containing scales and piles of scrap metal, paper and plastic. Traffic thins, but not the hazards: pond-sized puddles fill the mud streets, and Mr Tien either drives directly through them or skirts the edges.

Mr Tien and I met via email, and after a brief breakfast at the Sheraton, he agreed to show me the reality of Ho Chi Minh City’s scrap world. It is a small-scale industry and ‘dirty, but big, big money’. I told Mr Tien that I had the sense that – despite its abundance of even cheaper labour – the large processing operations that dominate China’s market are not yet a reality in Vietnam. Mr Tien wanted me to understand that, despite the decentralised nature of the business in Vietnam, the country’s small-scale traders have a nearly insatiable demand for high volumes of material.

Case in point: Mr Tien himself. Part of the reason that he agreed to take me on this death-defying ride is that he hopes the resulting publicity might lead to overseas partnerships. Repeatedly, he assures me that he could easily sell 1000 tonnes of ferrous scrap daily into the chaos that is Ho Chi Minh City’s scrap market. ‘If I have a scrap sample, all I need to do is make one phone call and all the people come running,’ he says.

Mr Tien stops the motorcycle in front of the open doorway of a small recycling operation by the name of (as best as I can tell) Anh Nguyen. Near the door,a small, cage-like room serves as an office. Mr Tien steps inside, announces his presence to nobody in particular, and then waves me forward. I take only a few steps into the dark building before stumbling over two female workers busy untangling a vicious, dirty mass of copper wire. As I move deeper into the facility, I pass piles of communication cable, transformers and a crumbling brick edifice that might be a furnace of some kind, but I really can’t tell.

Soon, a dirty tint of light drops from a crack in the ceiling that runs parallel to rows of partly-deactivated fluorescent bulbs. I am surrounded by spools of new copper wire, bound and ready for shipment, manufactured in the next room by workers
who spend their days working in puddles and dirt. Mr Tien tells me that he has sold hundreds of tonnes of communication cable here. ‘They can do one hundred tonne per day.’

I look around the cramped room. ‘One hundred tonne?’

As we leave, I notice a small congregation of maybe ten Vietnamese traders arguing with a hard-jawed, middle-aged woman holding a clipboard and manipulating the balance on a beat-up scale. Unfortunately, the flash on my camera distracts the woman enough to turn her fierce and angry attentions on me. Mr Tien quickly shuttles me out of the building.