On Saturday morning, Shanghai Airline Flight 9237, Shanghai Hongqiao to Linyi, Shandong, began boarding at 8:50 AM. Just before joining forty-some other passengers on the Bombarbdier CRJ, I took this photograph of the terminal through the morning haze. 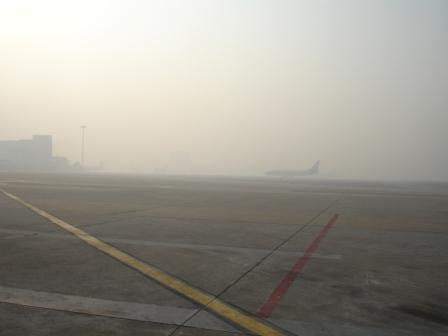 On the basis of too much experience, I try not to fly north of the Yangtze River before noon between the months of December and February. It’s not superstition (though it does sound weird), it’s the pollution: weather conditions seem to lock pollution – euphemistically, and almost universally, known as “fog” – into China’s inland, northern cities until early afternoon during the winter months, and I’ve been through more than my fair share of flight delays to prove it. Unfortunately, the only flight between Shanghai and Linyi on Saturday was the 9:10 AM flight. Central Shandong’s epic pollution levels did not guarantee an on-time arrival.

To my surprise, the jet took off promptly at 9:10, and began its descent around 9:50. But then, as it dipped into the gray clouds over Linyi, the plane suddenly jerked upward (gasps from passengers), banked left, and began a less than gentle circle. More than a little concerned, I dialed down my ipod so that I could hear the captain announce that “due to fog, we will be making an additional, unscheduled stop in Xuzhou.” That is to say, the pollution was so thick that either the captain or someone in the Linyi control tower decided that safety required an alternative landing strip. So we turned toward Xuzhou (roughly 250 km from Linyi) and landed at 11:00 AM. A photo of the air conditionsat the Xuzhou terminal: 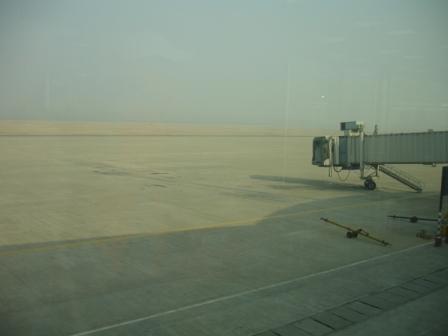 Compared to Shanghai, not bad. But still not good.

We spent the next ninety minutes in the terminal of the completely demoralizing Xuzhou Airport. There were no other departing or arriving flights (though someone managed to find the keys to the gift shop some ten minutes into our involuntary stay). Finally, at 12:30, we were told to board, and thirty minutes later we arrived in Linyi. Below, a photo of the conditions on the runway. 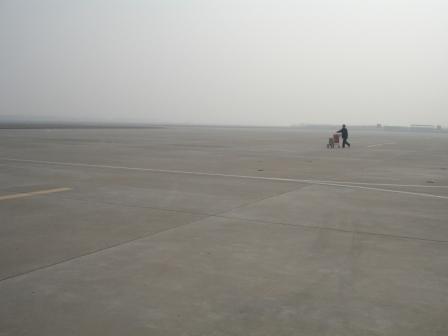 Again, not good – but certainly much better than Shanghai. In either case, it’s the first time that I’ve ever had a plane make an emergency landing elsewhere due to pollution. I have no idea whether this is newsworthy or not. If not, I’d be very interested in hearing from others who have had planes diverted mid-flight due to polluted conditions. If it is, well, thank goodness for blogs.