Like many expats, I’ve long been suspicious of the building materials utilized in Shanghai’s – and China’s – two-decade construction boom. The concrete, I’ve noticed, seems to crack too quickly; the rebar inside of that concrete has an uncanny tendency to rust and emerge from that cracking concrete too frequently; and the aluminum window frames so beloved for use in China’s highrises seem to corrode with the first humid wind. But it’s one thing to be suspicious of those building materials, and it’s another thing to have actual data on just how bad they are. And, despite my suspicions and best efforts, I’ve never been able to obtain actual data on building material inspections (or results) in Shanghai or elsewhere.

So I must say I was more than a little surprised when my beloved Shanghai Daily ran a story – this morning – containing this jaw-dropping revelation:

HALF the steel material sold at wholesale markets and now being used in construction has failed quality tests.

The Shanghai Industrial and Commercial Administrative Bureau inspected 52 batches of steel material at three markets and 15 construction sites in seven districts, including Xuhui, Zhabei and Baoshan, and officials said 27 batches had quality problems.

There are – according to the story – a couple of problems: the steel was often too light (five times too light, in one case) to meet construction standards; 48% of the tested steel lacked sufficient carbon content, rendering the material dangerously brittle; and 22% of the tested products failed tension tests. 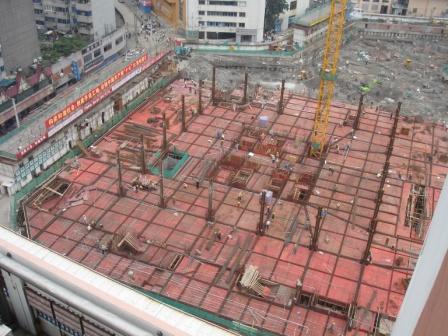 This is a big story, and it deserves sustained attention. Whether that happens is anybody’s guess. For now, I’d just like to ponder one question: What does all of that sub-standard structural steel mean – in practical terms – for Shanghai’s skyline – and your apartment building?

Xinhua tries to put a brave face on things by claiming – correctly – that brittle steel will fail to perform adequately in powerful earthquakes. But most of Shanghai’s – and China’s – buildings aren’t built to earthquake standards, anyway, so that point is moot. What Xinhua doesn’t say – but I will – is that buildings constructed with brittle, light-weight re-enforcing steel are – by definition – structurally inadequate. With any luck, architects over-engineered them, and nothing catastrophic will happen during what should be a shortened lifetime.

What’s most disturbing is that this is not a new issue. Overseas buyers of Chinese structural steel and other ferrous products have long known that Chinese manufactured steel typically doesn’t meet the quality (and chemistry) standards of foreign countries. But I think even the foreign importers would be shocked to learn that Chinese steelmakers are perfectly content selling substandard structural steel into Shanghai’s construction markets. So let me be the first to state: This isn’t just bad business; it’s immoral. And what’s even worse is that the steelmakers know full well that they can get away with it, and have been doing so for years. According to Xinhua:

Officials said building inspection does not include measuring weight and thickness for steel at present, which allows manufacturers to lower the standard.

No surprise, the Shanghai Industrial and Commercial Administrative Bureau won’t identify the companies who manufacture the sub-standard steel. Most likely, those companies are state-owned; but even if they’re private, they have powerful friends (no other way to stay in that business, after all). It would be nice to know, of course, but it would be even nicer to know which building construction projects were tested, and whether they were allowed to continue (I bet they were) with the understanding that they would utilize steel that meets the Bureau’s quality tests. And, of course, as someone who frequents Shanghai’s buildings, I’d like to know which ones were built with steel from the sub-standard steel mills. But I’m not holding my breath.

It will be interesting to see if this issue catches the attention of Shanghai’s – and China’s – nascent homeowner’s rights movement. After all, this seems like a far more pressing and immediate threat than, say, the maglev and its proposed route. Perhaps, if China had a well developed torts system – or even the most basic system of assigning liability and negligence – this problem wouldn’t exist. Of course, in the absence of such laws, Chinese homeowners have no recourse to justice and/or compensation – and steelmakers and building contractors have nothing to fear but loss of face.

Also, for further discussion in a later post: what will happen to twenty-year home mortgages taken out on Shanghai apartments which will only last – structurally – for ten years. At some point, I’m pretty sure, this is going to become an issue.

[Addendum 3/13: Via an email, I was reminded of a story that I reported but didn’t publish (last year) concerning Chinese steel quality. Without naming names (which is one reason that I didn’t publish) … three years ago, a European-Chinese JV steel foundary in Wuxi found itself in desperate in need of raw materials, and decided that it would begin feeding its metling furnaces with a mixture of scrap steel pipe procured in the Wuxi area. As it happens, Wuxi is one of China’s pipe manufacturing centers (an enormous industry, in fact), and there is a plentiful supply of pipe scrap for those willing to compete with local dealers for it. Another advantage of pipe scrap as a raw material for steel making- especially pipe manufactured for the export market – is that it is typically manufactured to very strict quality standards .

Anyway, the JV foundary built a furnace especially tuned to melt the precise types of pipe manufactured in Wuxi, and – at the same time – invested heavily in a locally-owned scrap yard to procure that pipe from Wuxi’s manufacturers. But there was one problem: none of Wuxi’s pipe manufacturers were able or willing to match the quality specifications that they claimed, and which were required by the steel foundry’s furnaces. As I was told by a foundry procurement officer: “The chemistry of the pipe steel is all over the place.” It wasn’t just one pipe factory, either; the foundry couldn’t find acceptable pipe scrap from anyone in Wuxi.

For better or worse, that prevented the steel foundry from utilizing its new furnace (note to other foreign-invested foundries in China: there is such a thing as due diligence), but it hasn’t yet dented Wuxi’s thriving steel pipe industry, which exports low-quliaty products throughout China and the world.] 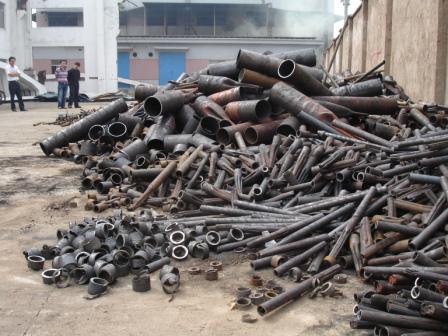