Chalk it up to my declining powers of perception, but yesterday I somehow managed to fly through Beijing Capitol Airport’s massive new terminal 3 building (986,000 square meters!) without knowing – or noticing – that it was the super-structure’s first fully operational day (h/t to Micah for pointing it out). 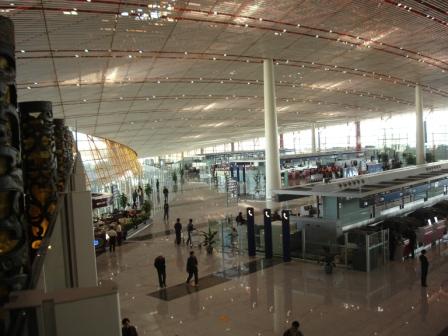 In my defense: the terminal has been open and operating since February 29. Yesterday was actually Phase 2 of a staged opening, with twenty additional airlines (including Shanghai Airlines, which I flew) moving their operations to the new building. Still, in the spirit of giving credit where it’s due: the fact that I didn’t notice anything unusual, any glitches, or even a delay (on my flight) is a credit to whomever is running things over there. It’s a comfortable, visually stunning facility, and I must concede that – in the future – I will no longer dread (as much) flying in and out of Beijing. This is progress.

I’ll have more to say about the food concessions at the new terminal in a day or so (just you wait). For now, I’ll leave readers with this photo of one-half of the domestic security check. I can’t speak to the quality of Chinese airport security (my impression is that it varies by location, just as it does anywhere else in the world), but for shear quantity of personnel, you really can’t beat Beijing Capitol: 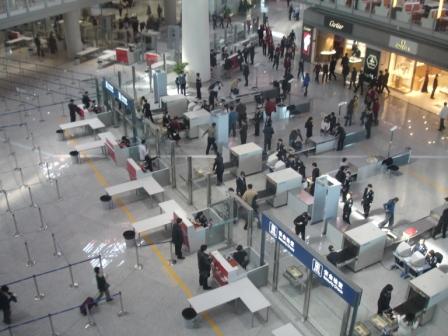 I’m sure that there will be days when there are actual lines for security. But yesterday – the first day – the hearty platoon of uniformed security deployed at the checkpoints basically guaranteed a trouble and wait-free process. Now if only the TSA could figure out a way to outsource …