On Monday, under the innocuous headline, “Restricting Traffic,” the venerable Shanghai Daily quietly informed the city’s residents that:

From 5am-5pm on April 30 and May 1, 4, and 24, cars are banned from the area inside Jiasong Highway, Shenzhuan Highway, Qianxin Highway and Sichen Highway. The roads themselves are not affected by the ban. Only cars with special permits will be allowed into the area during the road restrictions.

No explanation is given, so allow me.

In 1874, Pope Pius IX declared a full amnesty to any Catholic who made the pilgrimage to the Marian Shrine at Sheshan during the month of May. Ever since, Sheshan has been the site of a month-long May pilgrimage that typically attracts tens of thousands of Catholics from throughout China. Generally, over the last two decades, the authorities have allowed the pilgrimage to proceed with few restrictions (in 2003 it was canceled due to SARS) Below, a photo of the May 1, 2004 mass (by my old pal Yuko Sato). 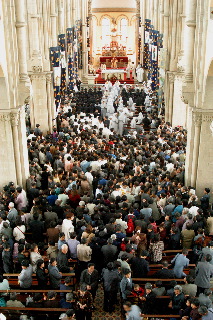 In June of last year, Pope Benedict released his long-awaited letter to China’s Catholics, in which he declared May 24 a day of prayer for the Church in China, dedicated to “Our Lady of Sheshan.” Since then, there has been much anticipation of this event – both within and without China – as it signals (in my opinion) the most explicit statement of unity with Chinese Catholics to come from Rome in decades.

Back to the Shanghai Daily article.

The restrictions outlined for April 30, May 1, May 4, and May 24 will effectively shut down motorized vehicle traffic into the Sheshan area for several square kilometers.

[Addendum 4/25: A good map of the geography can be found here. Sheshan is in the lower left corner. Thanks to Sean for the link.]

That is to say: It will be next to impossible to reach the church after 5 AM unless you want to walk (like pilgrims of old, I suppose). April 30 is the traditional start to the pilgrimage; the May 1 mass is typically said by Shanghai’s bishop (this year, too) and is always the best-attended; May 4 is the first Sunday of May, so that probably accounts for restrictions on that day; and the May 24 mass should be well-attended since it is – arguably – the most important in the 400 year history of the Shanghai diocese.

Meanwhile, from May 1 to 25, less restrictive traffic regulations will be in effect, but only until 2:00 PM.

That is to say, the authorities have rendered this year’s pilgrimage inaccessible to anyone who wakes after 4 AM. Brilliant.

The always well-sourced UCAN reports today on other restrictions being imposed on Sheshan for the pilgrimage period (they don’t mention the traffic ones), including a ban on group visits, and the closure of the Shrine’s guest houses (accommadations for 200) and canteen (seating for 500).

So, why the restrictions? I’ll let UCAN’s sources do the talking in this case:

“Due to the recent violence and protests in Tibet and other places, the government deploys such measures to ensure the safety of large crowds of pilgrims in Sheshan,” …

… [L]ocal government officials have been unhappy about the pope’s call for prayers for China, for which they interpreted as “the pope seeing China’s situation unfavorable and that it needs prayers,” he said.

[In related news, the “central government has further tightened the Olympic/face security screw and asked the European Union to cancel a festival celebrating bilateral ties and cultural understanding” (SCMP, and Asianews.it). Oh yeah, and the Beijing Midi Festival has been postponed.]

[UPDATE 4/23: Late this afternoon UCAN published its own report on the traffic restrictions.]