[12 September 2008 – Suddenly, this post is generating several hits per day from Venezuela. Could someone explain why?]

A couple of weeks ago Shanghai Daily reported that China’s first automatic “drinking bottle recycling machine” had been installed on Nanjing Road for RMB 30,000 (US$4290). The idea is simple: after finishing your canned or bottled beverage, you stick it into the machine, which then reads the bar code, accepts it, and pays you RMB .1 (US$.015)

Now, one might reasonably ask: why does China need machines to collect bottles and cans when there are tens of millions of hard-working scrap peddlers who’ll do the work for less than the cost of the new machine? Well, according to Shanghai’s city fathers, as reported in the Shanghai Daily, the idea is to put the scrap peddlers out of business because, quoting Shanghai Daily, “they have a negative impact on the city’s image.”

As longtime readers of this blog know, I love and respect China’s hard-working entrepreneurial scrap peddlers; they are my scrap brothers. But, being fair minded, I thought it only right that I give the machine a chance to prove itself. Perhaps it could make an argument for its superiority? So, late on a recent afternoon, I donned my Scrap hat (see photos, below), and ventured onto Nanjing Road to give this new contraption the Shanghai Scrap Once Over. Let’s have a look, shall we? 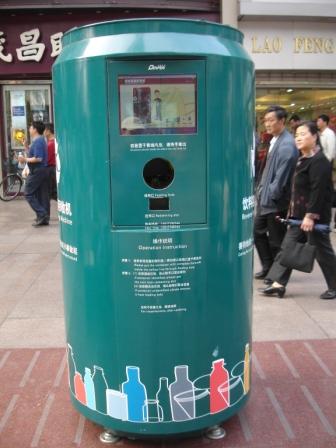 A couple of quick, off-the-bat observations. First, if the city’s goal was to achieve something environmentally friendly, this phone booth-sized metal device packed with electronics is an abject failure. Second, unless you actually go up to this device and read the instructions, there’s absolutely nothing self-evident about its purpose or function. That is, it fails the ‘what is it?’ test. And, on a related note, “Reverse Vending Machine” doesn’t help, and isn’t nearly as clever, or self-evident, as the manufacturer obviously thinks.

But – you must be asking – how does it work? Fear not: Shanghai Scrap arrived with plastic bottles and a couple of aluminum cans to determine just that.

To begin, I inserted a Nongfu Springs plastic water bottle into the hulking device’s … mouth? This is not a trivial point. It’s not enough to just slip your bottles past the lip of the machine. You’ve actually got to shove them in there a good six inches or so, up to your elbow, until they rest upon two rollers. Then, quite suddenly (while my arm was in it) the rollers begin to spin, and as they do, an orange light – presumably a bar code reader – searches for identifying features on the bottle (meaning, the machine can’t identify bottles from which labels have been peeled!). 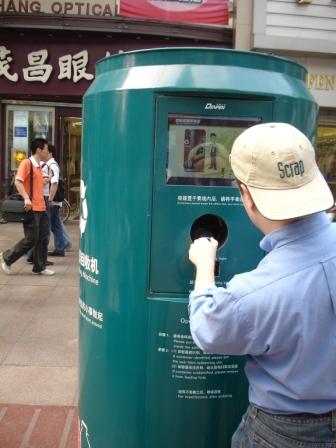 Anyway, my fully labeled Nongfu Springs bottle spun and spun and spun, and the orange lights, they flashed and flashed and flashed. And while all that was happening, a crowd which began to assemble around me, trying to figure out what I was doing with this big green can-like thing that nobody had ever noticed before … and telling me to stop sticking my arm in it, because I might get hurt. 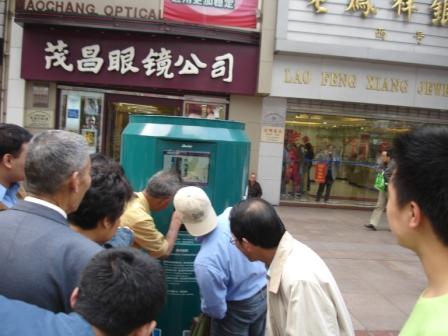 Note, in the above photo, the man in the yellow shirt to my left (I’m the guy in the Scrap hat). After a couple of minutes of watching my fruitless efforts at making the make the Reverse Vending Machine accept my bottle, Mr. Yellow Shirt inserted his hand into the device, examined the bottle, said, “Thank you” and promptly walked away with it. When I found him, a moment later, he was seated on a bench – beside the bag of bottles that he’d been collecting from people who’d also failed at their efforts with the Reverse Vending Machine. That is to say, the peddlers took the day, against the machine. 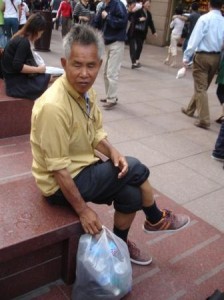 A couple of final, quick notes on this device. First, unlike its problems with plastic bottles, the device had absolutely no problem identifying the aluminum can offerings that I brought it. Big surprise, that: aluminum is worth significantly more than plastic.

Second, Shanghai Daily quotes an official by the name of Cao, with the Nanjing Road Pedestrian Street Office as claiming that the Reverse Vending Machine “received more than 1700 bottle during the three day [May Day] holiday.” Which works out to a bottle every three minutes or so, for three straight days.

I don’t think so.

Finally, a question: Can anyone out there think of another instance where a government unit in China has installed a technology with the express purpose of killing a labor-intensive business? I can’t. But there must be an example out there.

Anyway, unlike Shanghai Daily, I refuse to provide instructions on where to find the Big Dumb Recycling Machine. Instead, save your cans and bottles for the folks who really need them: your local Chinese scrap peddlers.

[I know somebody who knows somebody who has visited with the Big Dumb Recycling Machine’s manufacturer. I have contacted this person for further impressions, and will update just as soon as I hear something.]

[UPDATE 5/28: Maxiewawa made a short film clip of his (successful!) attempt to have the machine accept a bottle, and you can find it over here.]