But despite all of your efforts to uphold the Olympic Spirit in the most ostentatious manner possible, at the end of the day you go home, slip into your bathrobe, lounge across your silk sheets and feel as if the job is somehow left undone.

What’s an Olympic fan to do?

Yesterday afternoon, while out on a bit of a stroll south of Xujiahui, I found your cure: the official Beijing 2008 Olympic Bed & Bath Store! 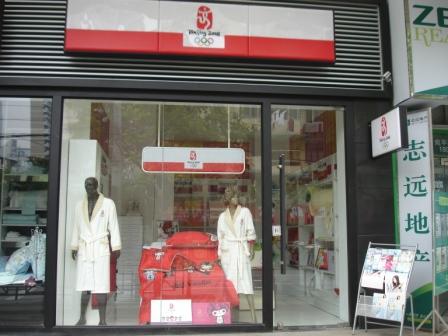 Alas, the shop was closed (at 12:30 PM), so I was unable to take any photos inside of this licensed emporium of Olympic-themed bed and bath products (including pillow cases, bed sheets, and bath towels). But I did my best to shoot some images through the windows, including a few of the really fine bathrobe mannequins. After the jump, some photos and unsolicited observations concerning taste and Olympic merchandising.

A while back, in the midst of a somewhat related story to be published in August, I made an attempt to find out how the IOC and BOCOG determine which licensed merchandise best upholds the Olympic Spirit – and which doesn’t. Why, for example, would the IOC license key chains, but not, say, ashtrays? Or, harder yet, why license chopsticks and not, say, sushi knives?

[a decision-making process that – I assume – is distinct from the one that licenses Budweiser to slap the Sacred Rings on beer cans.]

Alas, my two requests for clarification on this issue were answered with silence.

In either case, somebody, somewhere, clearly thought that Olympic hand towels, pillow cases and bed sheets were an appropriate expression of the Olympic spirit – if not its merchandising goals. And somebody else obviously thought enough of those products to sign off on Olympic Bed & Bath (my name for this shop, by the way). 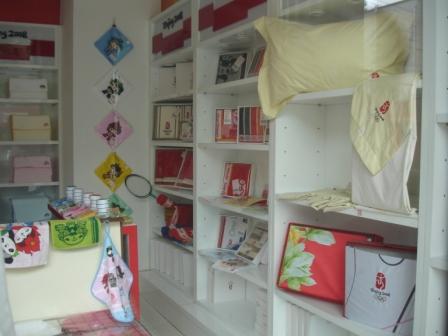 Now, to be fair, there’s very little difference between the kind of merchandising done by BOCOG and the IOC, and that done by professional sports leagues in North American and Europe. But, in further fairness, professional sports leagues don’t claim to be anything more than vast money-making enterprises, while the Olympic (ahem) Movement cloaks itself in non-profit status and all kinds of sanctimonious hooey about the Brotherhood of Man, Sacred Flames, and some sort of Spirit. As a result, unlike, say, Major League Baseball, BOCOG and the IOC place themselves in the uncomfortable position of having to answer for whether or not their products reflect their stated values. Thus, in my opinion, it’s fair game to ask how plush bathrobes uphold “a spirit of friendship, solidarity, and fair play?” Or – in what way does the large collection of official Beijing 2008 hand towels contribute to “building a peaceful and better world?” 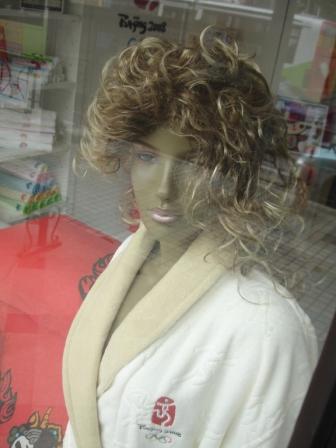 Admittedly, I haven’t queried the IOC or BOCOG on these matters, and I’ve no intention of trying. They’ve ignored me twice, already.

Olympic Bed & Bath (again, my name – the store lacks a sign other than the one bearing the Olympic logo) is located next door to an established bed & bath retailer. And, from the looks of it, the Olympic shop is actually a walled off slice taken from the real bed and bath shop. So, if I had to guess, that real shop somehow wrangled the license to operate an Olympic version of itself. More power to them, I guess. After all, somebody’s gotta help pay for those new stadiums, and better to do it with baby bibs than foreign currency reserves.

[In response to a brief conversation on this topic: I have no idea if Beijing 2008’s merchandising efforts exceed those of other Olympic games (Atlanta was a money-making event, if ever there was one). But, if I had to guess, I’d guess that it’s right up there. And, I’d also guess that it’s the first Olympics to feature branded gold bars, and a Bed & Bath themed store. But I’m open to being proved wrong on all points.]