According to today’s edition of my hometown newspaper, it is now illegal to sell Chinese-made American flags in Minnesota – punishable by up to 90 days in jail and/or a US$1000 fine. The spirit of the law is well-expressed in the lede:

That American flag you’re buying in Minnesota for this July 4th will be more than 13 stripes and 50 stars. It will be made in the U.S.A.

Apparently, the legislation came into effect at the end of last year, and it’s getting a bit of added attention this week because this Fourth of July will be the first that Minnesotans will be denied a choice in the country-of-manufacture for their flags (hitting them in the pocketbook, too, at the worst possible time. what’s so patriotic about that?). Now, just to be clear, the legislation doesn’t specifically target China. But keep in mind that the vast majority of flags imported into the US are (according to the nativist Flag Manufacturer’s Association of America) manufactured in China. Thus we have the intent of the law:

Rep. Tom Anzelc, DFL-Balsam Township, said he thought it was ‘ludicrous’ and ‘un-American’ to have U.S. flags made abroad, in countries such as China. Anzelc … said he believes people would gladly pay the extra cost if it puts money in the pockets of their neighbors.

Of course, if this was just about preserving American jobs, then the Minnesota legislature could have banned the import of other Chinese products. But they didn’t. Instead, they chose the flag – the most loaded of loaded symbols – and left it to others to decide what excluding Chinese manufacturers means in this case.

Now, where I come from (Minnesota, not to belabor the point), intents and perceptions are often two different things, and one sometimes needs to wonder if the cost of the latter is really worth the former. In that spirit, I just can’t help but feel that there’s something profoundly un-American about the implicit suggestion that foreign hands aren’t worthy to weave Old Glory. Especially considering that, for two centuries, the implicit promise of America has been that foreign hands can become proud bearers of Old Glory. So count me as one Minnesotan just as proud to wave a flag sewn by Chinese seamstresses in Dongguan as I am to wave one made by union laborers in Duluth. Maybe more so.

A couple of additional notes:

1. The governor who affixed his signature to this abomination is one Tim Pawlenty, perhaps best known as the up-and-comer rumored to be the front-runner to be John McCain’s running-mate in the fall. Good for him, good for Minnesota. But in my somewhat limited experience, Pawlenty is best regarded as an unabashed supporter of free and expanded trade between Minnesota and China. He’s the architect and promoter of the innovative Minnesota-China Partnership. He’s made two official visits to China (and attended two small, private receptions held in his honor by the Minnesota Club of Shanghai), and he’s actively – actively – promoted the interests of US companies in Asia. In other words: He knows better than to sign something like this. So, in sincere thanks for the blunder, a photo of Governor Pawlenty, the Vice-Presidential contender, playing video games at the Shanghai Best Buy store earlier this year: 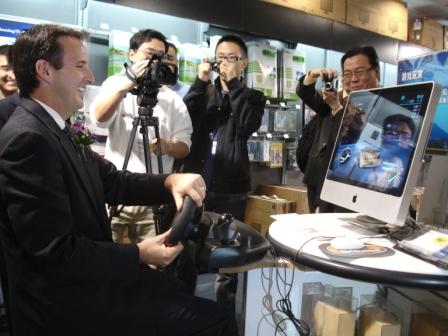 [Note to the McCain campaign: there’s more where this one came from.]

2. The chief sponsor of this legislation is Representative Tom Rukavina. I like Representative Tom Rukavina. A lot. Many years ago, I profiled him for a Minneapolis-based magazine, and in the process of reporting the story, his elderly mother and aunt made spaghetti for me. So I like them, too. Likewise, I know, personally, that Rukavina’s heart bleeds for the declining fortunes of the Minnesota Iron Range that he represents. In the space of a few years in the 1980s, it shed almost half of its job base as the US primary steel industry declined. But here’s the kicker: over the last five years, the Iron Range has revived, and 75% of that revival has been the result of foreign investment in the area, including direct investment by a Chinese company (Laiwu Steel) that resulted in a dormant iron mine being re-opened. So, all things considered, one would hope that Tommy could realize that trade is a two-way street.

Somewhat related, and much more upbeat: Hey baby, it’s the Fourth of July.