Well, well. Today, Han Meilin, the famously grumpy designer of the 2008 Olympic mascots, the Fuwa, provides an interview to the Wall Street Journal in which he claims that the universally reviled mascots weren’t his fault:

After China’s Olympics organizers gave him the assignment, folk artist Han Meilin initially sketched out five children representing the traditional Chinese elements of fire, wood, water, gold and earth. Then the bureaucrats got involved. “There had to be a panda, even though you’d think the public would have had enough of them,” says the 72-year-old artist … Games officials faxed one request after another to his studio for other national images, such as a kite, a sturgeon and ancient cave drawings. So Mr. Han gave them Carmen Miranda-style oversized hats to help hold all the symbolism.

Mr. Han … says the Fuwa “could have been much better” had they not been so saddled with stuff. Their creation, he says, got off on the wrong foot when officials opened a national competition for designs. Although he was on the judging committee, Mr. Han didn’t like any of the winners.

“Can you believe it? Those are the drafts that they sent through and asked me to modify,” he says, pointing to monkey, dragon and tiger designs that he keeps stacked away on a shelf in his workshop. “I’m an artist. It is humiliating,” he says. 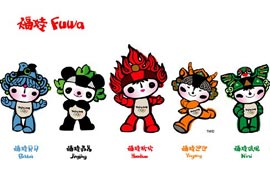 All believable, I suppose, but it’s worth pointing out that – back in 2005, before the Fuwa became an international joke, Han Meilin was singing a different tune – particularly in an extended interview that he provided to the Beijing Times:

Han: The friendlies were based on the prototypes given to me by Mr. Wu Guanying from the Tsinghua University Fine Arts Institute … [A]fter spending a fruitless night on them, I couldn’t go on with my work. So I took a cold-water shower. While I was bathing, the idea flashed across my head – why not let these creatures wear headgears with animal characteristics …

… Reporter: Do you have regrets over the friendlies?

Han: Yes. The biggest regret that held me now is that the friendlies failed to embody the great art of Chinese calligraphy. We tried for thousands of times, but the results came out unsatisfactory.

Reporter: Among the five, which is your favorite?

Han: All these five were from my hands. I am like their father. There’s no preference inside me. But picking up the color for Nini (swallow) tortured my team really, so the color side of Nini is a bit unsatisfactory to us.

What a difference three years and a wave of international mockery makes!

But what I find most irritating about the Artist’s self-serving WSJ interview has nothing to do with aesthetics and everything to do with commerce. Below, the final sentence from today’s WSJ article:

His relations with the Olympic committee are frosty. “I was supposed to be paid one yuan for making the Fuwa, but haven’t yet even gotten that.”

And here, the corresponding passage from the 2005 Beijing Times interview:

Reporter: How much did the Olympics organization committee pay for your work?

Han: I don’t want any payment, besides the copyright, but the committee rewarded me one yuan.

Full disclosure: back in April, I tried – unsuccessfully – to obtain my own interview with Han Meilin for a short feature that I wrote for Print. I’m not sure why I was refused, but – after reading the WSJ article – it’s quite clear to me that the Artist would have been less than thrilled about having a serious design magazine evaluate his work.