Xinhua and Shanghai Daily are reporting that the largest block of traditional, shikumen-style housing left in Shanghai is about to be converted into a luxury hotel complex named Jianyeli. As reported by Xinhua:

The project, called Jianyeli, will reuse bricks and original materials in its reconstruction. The buildings, which were built during 1931 to 1938 on Jianguo Road W., form the biggest area of traditional houses remaining in Shanghai.

Below, the photo that accompanies the Xinhua version of the story: 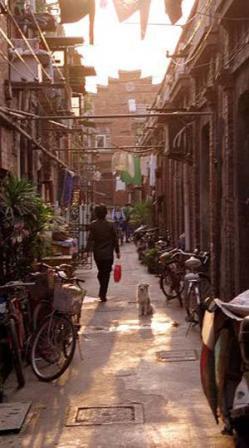 It just so happens that I live a few blocks from Jianyelli, and I’ve watched – with no small amount of consternation – as the entire, massive complex was slowly razed over the last couple of years. Below, a photo of what it actually looked like on June 8, when I last took a peak through the thick steel doors that hide the site from prying eyes. 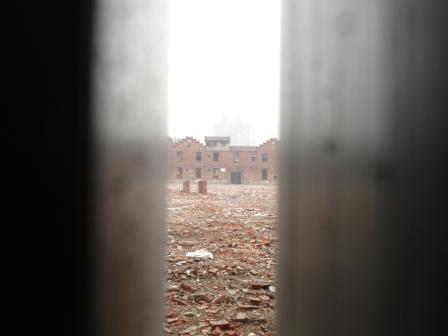 [UPDATE: I’ve received a couple of emails which lead me to believe that I wasn’t entirely clear in this post. So let me be clear: there is nothing left of Jianyeli. It’s been demolished; razed; obliterated. Shanghai Daily might be under the impression that it “form[s] the biggest area of traditional houses remaining in Shanghai,” but all you need to do is walk by and see that there’s nothing remaining (or look at the above photo). Jianyeli isn’t preservation; it’s new construction accessorized with a few old bricks from the 1930s.]

[UPDATE July 8: Thanks to TM for pointing me to a 2005 Eastday article concerning the Jianyeli renovations:

Work will begin this year to renovate an extensive area of shikumen houses in downtown Shanghai to return them to the way they looked 70 years ago, a senior official said yesterday … “We will conserve the exterior of the lane while making appropriate adjustments to the lane’s inside structure,” Wang Anshi, head of the renovation and management department of the Shanghai Housing and Land Resource Administrative Bureau, said yesterday.]