I’m in London at the moment, far away from all things Asian, especially the ongoing and increasingly violent anti-government protests in Thailand (now including efforts to shut down Thailand’s air and rail links). But that was not the case in June, when I was in Bangkok for ten days and made several visits to the protest site. I don’t pretend to know or understand all of the the factors that are inspiring the unrest in Thailand. But I do recall that in June the situation was peaceful, with a bit of a carnival atmosphere, even. Apparently, patience – on both sides – has worn thin.

In any event, over the last couple of days I’ve had a big visitation spike to my one and only Bangkok protest post, which included a dozen images taken in early June. Find it here. 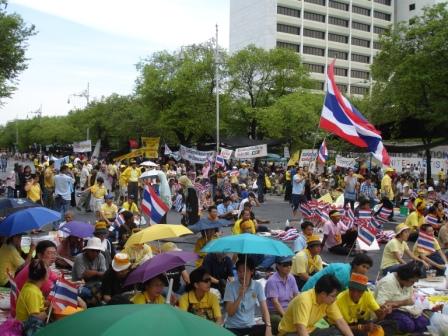 Regular blogging will resume next week. Alas, it won’t include my long-planned “Pawlenty in China” post, complete with photos of the governor enjoying the hospitality of the Minnesota Club of Shanghai.