Over the last week I’ve received at least one email or phone call per day in regard to the crackdown/ban on Beijing’s scrap peddlers during the Olympics period. As I’ve said to those who ask, I’ll say to those who read: I don’t plan to arrive in Beijing for another ten days, and until then, most of what I know about this issue is what I’ve been told. So, with that in mind, let’s take a look at what’s going on.

Back in May, Beijing announced that the roughly 250,000 small-time, full-time scrap peddlers (no reliable census exists) who operate in and around Beijing would not be welcome during the Olympics period. And, to seal the deal, they also shut down the city’s thriving markets where the scrap recyclables are usually sold, stationed cops at noted scrap transit points, and generally made life miserable for anybody who wanted to make a fen recycling Beijing’s considerable trash flow. The idea being, in general, that Beijing’s image is harmed by poor people carrying stacks of cardboard, or by entrepreneurial families that transform their homes into waste sorting stations. 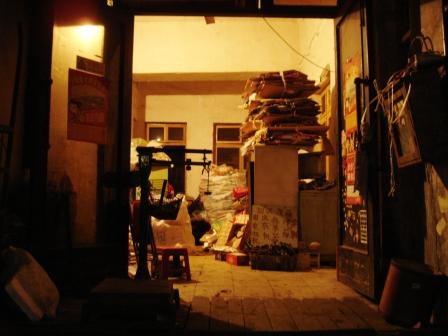 [Ian Ransom’s story for Reuters on the crackdown offers a very good summary of the issues. See the end of this post for a brief commentary on one aspect of it.]

Now here’s what I know …

the fact is the crack down from about 6 weeks back wore off, several folks are still there, some markets completely wiped, but the way way outlying ones seem ok, transit at night even more than usual, folks find a green labeled truck if they can. Overall effect: maybe 50-80% less being collected daily, but not total shut down, folks sitting on stuff, from old ladies to folks with permanent collection points.

… [A]nother overall feeling: it’s just like so many other PRC public policy moments, a surge or ridiculous regulative strangulation  (in late May/June) scaring lots of folks off, and then the inevitable paralyzed results that lead to a loosening up.

Nobody’s more reliable on the tangled world of Beijing’s scrap peddlers, so – this Shanghai scrap blogger – will take that as the final word, for now (even though Josh probably wouldn’t want me to).

A couple of additional, final thoughts

Beijing, like many of China’s largest municipalities, has long dreamed of putting the city’s scrap peddlers out of business and replacing them with a city-run company that could – theoretically – benefit from the high margins on recyclables pulled from Beijing’s waste stream. The idea, as it’s been explained to me, is that the peddlers would be welcome to collect recyclables, but they would be doing it on behalf of the city, and not on behalf of their entrepreneurial selves. This concept has been tried in other cities, and with a common theme: it fails, miserably, every time (more Shanghai Scrap thoughts on that topic, here and here). Quite simply, a talented independent peddler can out-collect, and out-compete, a city-owned one, any day of the week.

But the Olympics offer an opportunity unlike any other. In effect, for the first time in China’s modern recycling history, a city has been able to exile the competition. So far as I know, Beijing doesn’t have a plan in place to replace the peddlers when they’re allowed back in the city later this fall. But through a well-connected source I know that that there are municipal officials who are actively evaluating the intrinsic value in the city’s stagnant waste stream in their absence, and that data will no doubt be used for some kind of asinine, doomed-to-fail, for-[no]-profit scheme in the next year or so.

And the best proof of that are the quotes provided to the above-mentioned Reuters story by Professor Wang Weiping of Renmin University:

Wang [Weiping], one of Beijing’s foremost experts on the city’s recycling industry, submitted a report recommending officials “convince” the collectors to return to their home provinces for the duration of the Olympics. The workers process up to a third of Beijing’s trash and have a “positive effect” on society, but most have criminal records, leave second-hand environmental pollution, and pose a health threat, Wang said.

“According to our studies, more than 70 percent have contracted infectious diseases, such as dysentery, hepatitis and typhoid, and can easily infect others in the city,” Wang said.

“I hope these people can temporarily sacrifice their interests and go home and then come back after the Olympics … Their losses won’t be that great.”

Back in March, I had the distinct pleasure of sitting through a Wang Weiping speech at the 2008 China Resource Recycling Association conference in Dongguan. Though billed as an examination of China’s recycling “materialization,” it turned out to be mostly about Wang Weiping himself. Four key points from my notes:

Now I don’t know kind of pressure – or benefit – Wang Weiping received for claiming that the majority of Beijing’s scrap peddlers are diseased criminals (total BS, by the way). But whatever the case, it’s a far different claim than the ones that he made to several hundred people in Dongguan. 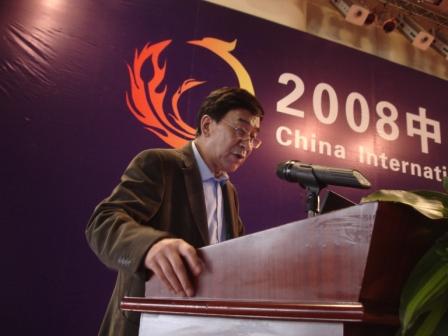