I moved to China nine days before the 2002 mid-Autumn Festival – the Mooncake Festival – and it’s been my favorite Chinese holiday ever since. But I’ll leave that story for another time. For now, suffice it to say that – in my years here, I’ve been witness to the development of the mooncake status symbol, whereby the simple mooncake – a pastry that wraps around, say, lotus paste – has been transformed into a branded delicacy and Status Symbol. Two years ago, for example, I received a leather embossed box of four shark fin mooncakes complete with three (three!) 2gb memory sticks and a gift certificate for a dinner for two at a nearby hotel buffet – all branded with the name of that very same 5-star hotel. 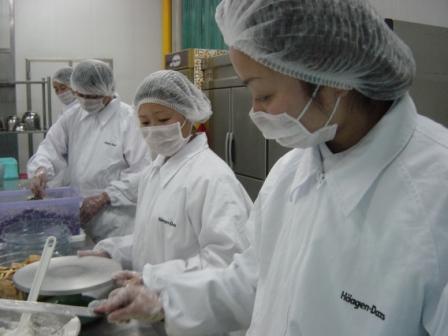 But as status inducing as that box was, no mooncake better exemplifies the mooncake transformation than the almighty HÃ¤agen Daz mooncake (one thoughtful friend from Heilongjiang calls them the “perfect fusion of Chinese traditional culture and American commercial culture.” Indeed). I can’t speak for the rest of China, but in Shanghai, these expensive little ice cream-filled pastries have become the mid-Autumn festival gift of choice. Put differently – you ain’t nobody unless you’ve been given – or can give! – a certificate to redeem a stylized box of RMB 520 (US$82) ice cream-filled mooncakes.

As it happens I’ve been invited to dinner on Sunday night (the night of the Mooncake Festival), and it occurred to me that it might be a right nice thing to bring a box of these fabled status-inducing mooncakes. So, I approached the shady catalog dude and inquired into what he might have available. He claimed to have two choices. The one that interested me had a catalog list price of RMB 528 (US$82.75) for, like, eight chocolate-looking mooncakes.

Okay, I admit – I had to wonder what these fellas were doing with a bunch of high-priced HÃ¤agen Dazs mooncake certs in front of a recently closed HÃ¤agen Dazs store. But let’s face it: that’s not my business.

So I started the negotiations and – I’m sorry to say – they quickly broke down when we reached the RMB 400 impasse (US$62.70). After all, unlike most of the people who buy these things (with the intention of handing them off to somebody who will likely hand them off to somebody else), I was actually intending to eat them with the good people who have invited me for dinner on Sunday. But, as I see it, I could buy my hosts several tubs of HÃ¤agen Dazs and a baker’s inventory of croissants for that kind of money (and I might just do that).

In any event, a few hours later I later mentioned this mooncake fire sale/scalping operation to a friend of mine (a successful Shanghai businessperson), who immediately dispatched an office assistant to buy up as many of them as the shady trio were willing to relinquish. Not sure how that worked out, but – come tomorrow – if you’re still in the market for Status Cakes, shimmy down to Huangpi and Huaihai. The pastry scalpers will almost certainly still be there.