On Tuesday morning I arrived at the airport two hours before flight 26’s scheduled departure and took my place in the very long check-in cue that snakes in front of the Northwest counters. Ahead of me, I could see that all passenger luggage was being hand-searched by airport staff before passengers were allowed to check it. This is nothing new: it’s been going on – off and on – for several years now, and likely has to do with the fact that NW 26 continues to Detroit after a Tokyo layover.

On Tuesday I stood in the coach check-in lane until recalling that I have Northwest “elite” status, which – among its handful of benefits – allows me to check-in via the shorter line designated for first class passengers. So, I slipped beneath the stanchions and took my place behind a mere two passengers (rather than the dozens lined up in coach). 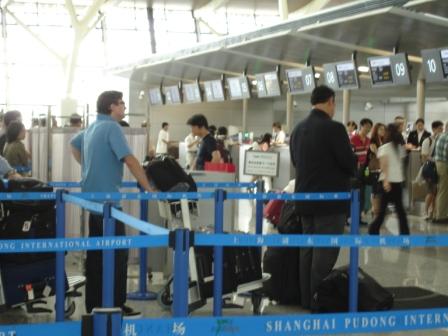 Perhaps I’m missing something here, but this struck me – and strikes me – as a giant security hole. Put it this way: if you’re flying Northwest from Shanghai to Tokyo, and you don’t want to subject your bags to a hand-check (for whatever reason), simply buy or upgrade to a First Class ticket. You’ll be hand-check free (at least, you would have been last Tuesday).

Before posting this item, I contacted Northwest Airlines and the Transportation Security Administration [TSA] and notified them of my concern. Both responded, in different ways.

First, TSA, which sent me a form brush-off pointing out that security in Shanghai isn’t their problem. According to their email:

As a sovereign entity, that country may establish its own security requirements for airports and air carriers that are not necessarily the same as those required in the United States.

Fair enough, I suppose, though it’s very much a fact that TSA requires certain security standards for air carriers flying to the US. It may be that TSA doesn’t see anything particularly threatening in only hand-screening coach-class passengers in lieu of China’s other security precautions (of which I know nothing). But because they only sent me a form response, I can’t say for sure.

Next, Northwest Airlines. This afternoon I received a phone call from an individual identifying herself as a Customer Service representative for the airline. She told me that she was aware of my concerns, and asked me to repeat them for her. After I did, she assured me that “all passengers are subject to the same security requirements at Northwest Airlines,” but that she would be addressing this issue with the relevant Northwest officials in Shanghai. Obviously, the first part of this statement is false: on Tuesday, at least, first class passengers were subject to less stringent security requirements than coach class passengers. One can only hope that she – and others – follow-through on the second part of the statement.

Alas, as I’ve written in the past, this kind of slip-shod approach to passenger safety is not unknown at Northwest. Later this year, that may change: Northwest is being acquired by Delta Airlines, which – I’m told – tends to take a greater interest in the safety and comfort of its passengers. I certainly hope so.