This one’s for the folks outside of Shanghai.

If you live in Shanghai, you are almost certainly aware of this advertisement for the high-end Dragonfly Spa which, prior to this campaign, emphasized its classical Chinese roots. In fact, there’s evidence to suggest that I may have been the last expat in Shanghai to see this campaign (it seems to have been placed, full page, in every English-language magazine in Shanghai). But whatever. There’s much to admire here … and to admire it in all of its glory and color, click on the thumb below to get an expanded image. I think, as details go, nothing quite beats the lower lip bite. 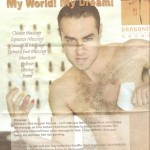 As it happens, I know people who know this model (he is not a professional model – go figure), and though I’m not at liberty to divulge what was said to me in regard to this image, suffice it to say that there is puzzlement all around.