It’s becoming harder and harder to pretend that I’m not blogging again until November 1. But my sincere desire to be fair and balanced requires that I make one more post related to the notorious Ningbo scrap kidnapping.

For those who haven’t been following the issue, the international scrap trade is being roiled by allegations that a British metal trader was recently kidnapped and held for a US$350,000.00 ransom by a provincial-level, state-owned scrap firm. All of the details – including source docs – are available at the post just below this one.

In any event, James Xu, the Ningbo scrap trader alleged to have orchestrated the kidnapping has retained legal counsel (specifically, Flower & May, a Ningbo firm that self-describes itself as comprised of “five high-flying lawyers“). Apparently, with their help, he has drafted and released this personal statement addressed to … well, click on the image for enlarged details: 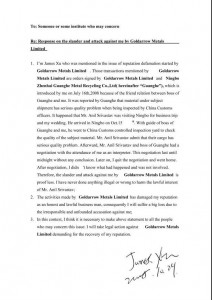 After the jump, a “Lawyer’s Letter” on Flower & May letterhead: 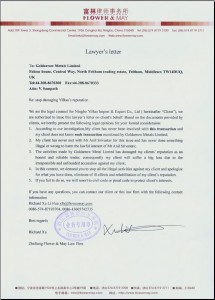 Last week, the managing director of Gold Arrow indicated to me that he, too, would be taking legal action. It’ll be interesting to see how that works out. In the meantime, I’m still waiting to hear back from Gold Arrow in re to my request to speak directly with Mr. Anil Srivastav.

In the meantime, comments from lawyers or other individuals experienced in these kinds of matters would be much appreciated.

[UPDATE 10/31: Reader Forrest points me to Mure Dickie’s story in re to the kidnapping in today’s Financial Times. The story confirms that the Ningbo police were involved in the incident.]