There are tens of thousands of American expatriates in China and, in my experience, they share only one universal concern. Namely: when will Taco Bell finally arrive upon these shores?

There is much more to this than what might first meet the eye. After all, Yum, Inc., which owns Taco Bell, also owns KFC. And KFC, for those who follow these things, is the textbook example of how a Western consumer brand can and should adapt to local tastes if it hopes to thrive in China. Today, KFC is not only the largest, most successful restaurant chain in China, but it also generates in excess of 20% of the US-based company’s global profits. So, really, isn’t there some excess cash in the coffers to test-run a few Taco Bells in Shanghai (in Xuxhui, please)?

Now, American expatriates of a certain vintage might recall that Yum opened something called Taco Bell Grande on Nanjing Road back in 2003. And, no surprise, the high-end sit-down abomination failed (no chalupas, no gorditas, no success). Since then, no Taco Bell.

In any event, over the last couple of weeks I couldn’t help but notice that KFC has rolled out a massive marketing campaign for a new, er, entree that looks – to me, at least – suspiciously like a burrito. Below, the advertising display for the “Tender Beef Pentagon” [better translations are welcome!] attached to the cash register at a Xujiahui KFC (click for an expanded image): 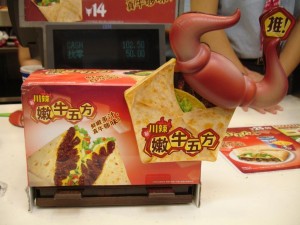 How could I resist? After the jump, Shanghai Scrap unfolds the “Tender Beef Pentagon” and reveals its hidden Mexican roots …

Served alone, the Tender Beef Pentagon runs a pricey (for KFC in China) RMB 14 (US$2.05, today). It comes in a paper bag, and – not to beat a dead burro – it looks like a mis-wrapped Taco Bell burrito to me: 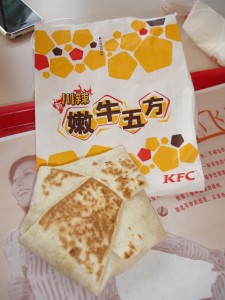 But what, you may be asking, is actually inside of the Tender Beef Pentagon? Below, a Shanghai Scrap exclusive (click for enlargement): 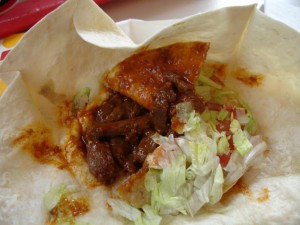 First layer is beef, pan-fried (simulated, at least), in a spicy sauce that KFC advertises as Sichuan-style. But it doesn’t take a food critic to figure out that the sauce is – ahem – Tabasco, style. As in, the Mexican state of Tabasco. But the real giveaway is the corn tortilla chip that sits atop the beef, and really defines the taste of this thing. That’s right: it takes like a hard taco shell drenched in tabasco. To cool things off, the tortilla chip is topped with lettuce diced tomatos … and, well, it looks like sour cream, but it tastes like mayo (I’ll admit: nothing says fake Chinese burrito like mayonaise).

So what on Earth is going on here? Does Yum really believe that they can pass this off as Sichuan food? Or will they own up to the fact that – secretly, quietly – they are quite obviously trying to acclimate their Chinese customers to the wonders of Mexican fast food?

UPDATE: Okay, thanks to a helpful comment from Nanjing’Ed, there is no longer any mystery here: The Tender Beef Pentagon is officially Mexican-American food. Apparently, while I was spending all my time in China, Taco Bell introduced a six-sided Burrito-like thing called the Cruchwrap Supreme. Below, compare the six-sided Crunchwrap (left, photo from Fast Food News) with the “Tender Beef Pentagon” (right, from lunch, today). 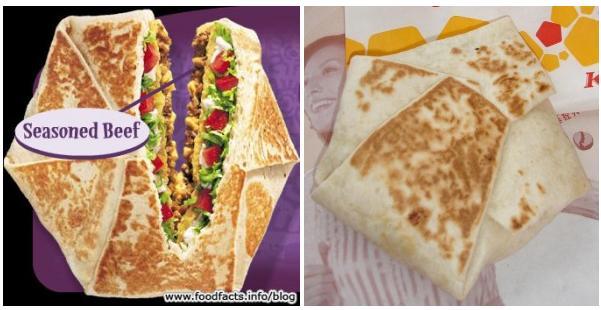 Via the Taco Bell website, the official company description of the Crunchwrap Supreme:

In other words, the pentagon was originally a hexagon.