I’ve written several times, and at length, about the project to restore/replace the stained glass windows destroyed in Shanghai’s St. Ignatius Cathedral at the onset of the Cultural Revolution (in most detail, here). So, for this reason, and the fact that I have another essay on this very topic about to go into print, I’ll avoid going into much detail now. Suffice it to say that Wo Ye, the Beijing-born artist whom Bishop Jin Luxian commissioned to design the windows, has spent the last eight years creating Catholic stained glass windows that are avowedly Chinese, incorporating traditional design elements and iconography to create something entirely unique and contemporary in both Chinese, and Western liturgical, art. 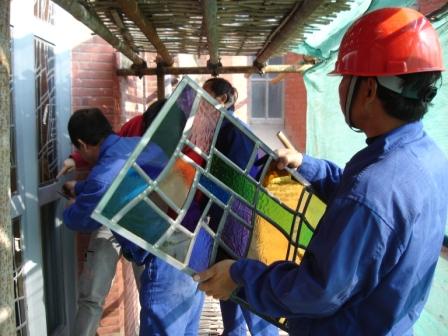 So far, the cathedral’s first level nave chapels have been completed, as well as one side of the transept and the very top-level apse windows. That is to say, Wo Ye’s artistic presence is felt within the building. But over the next two weeks that presence will be expanded into a very definite footprint as the large, top-level windows that line the nave and the remainder of the transept are transformed into a golden bamboo garden complete with magnolias, lillies, and roses. By mid-December, this grand old building will have become much more colorful, Chinese, and – it must be said – feminine (so far as anyone knows, Wo Ye is the first woman – not to mention, Chinese – to ever receive a complete Catholic cathedral commision). Above, an image, taken this afternoon, of a panel about to be installed.

One side of the cathedral will be installed over the next several days; the other side will be completed before mid-December. The transformation of this great church is going to be dramatic, and notable. Make no mistake: these windows are not only important works of religious art, they are major works of Chinese art.

And I’ll leave it mostly at that. Below, a selection of photos that I took during today’s installation. I’ll add a caption where necessary. One final note: though he was not able to be in Shanghai for the installation, Fr. Thomas Lucas, S.J., Associate Professor of art at the University of San Francisco, has played a key role in this restoration, both as a technical and liturgical adviser.

The view from the scaffolding, a harrowing 60 feet above the ground … 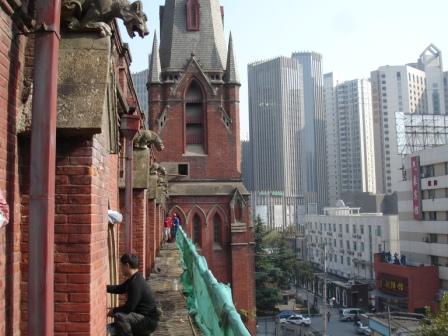 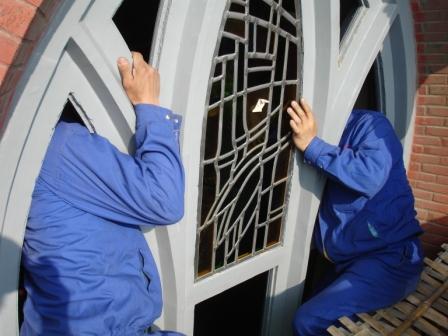 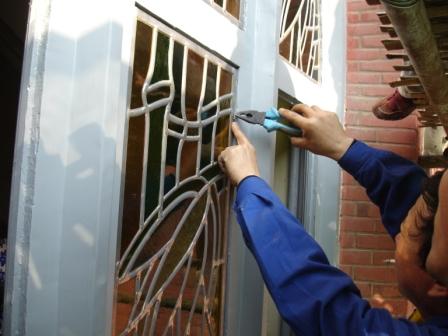 The artist checks a support rod … 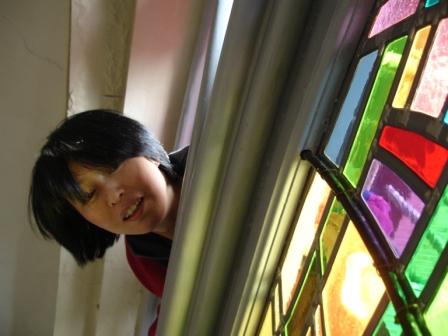 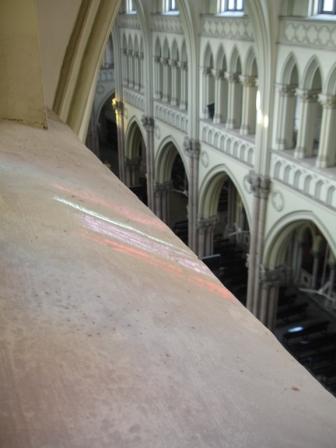 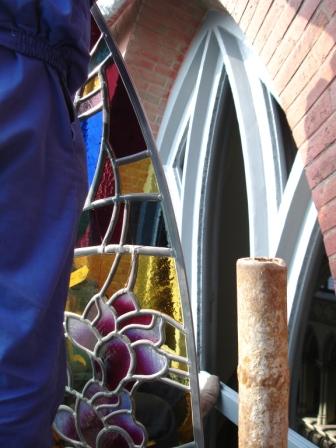 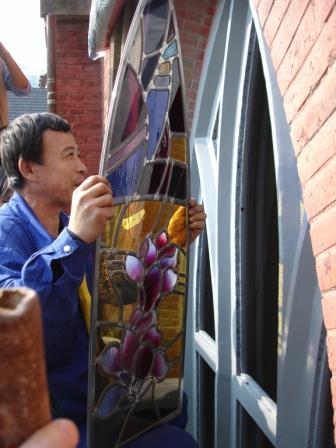 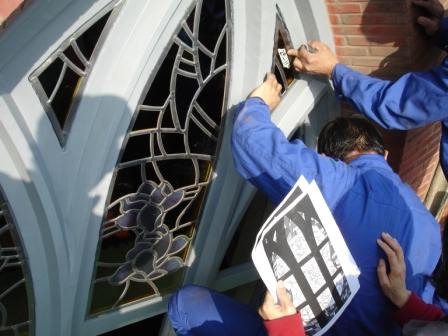 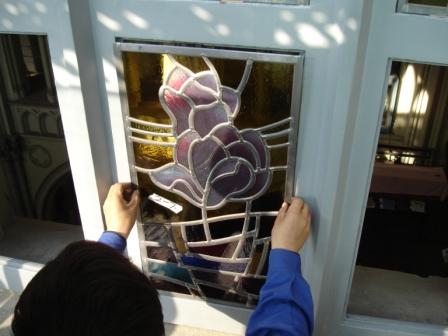 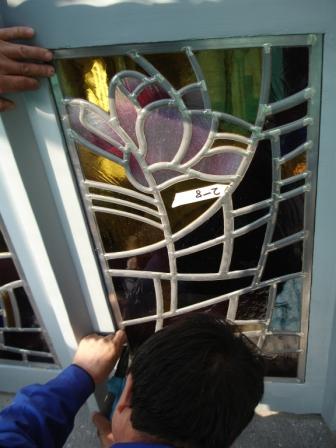 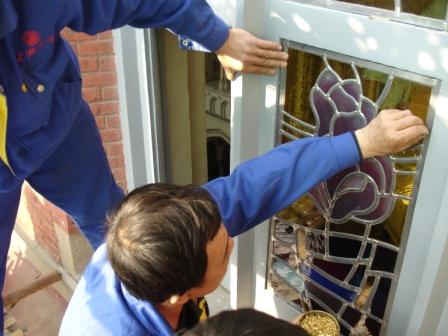 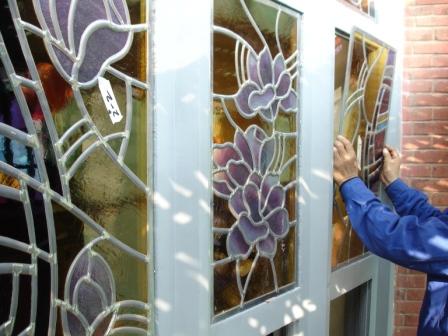 The “magnolia window” just after the final panel was nailed into place. Click for an enlargement: 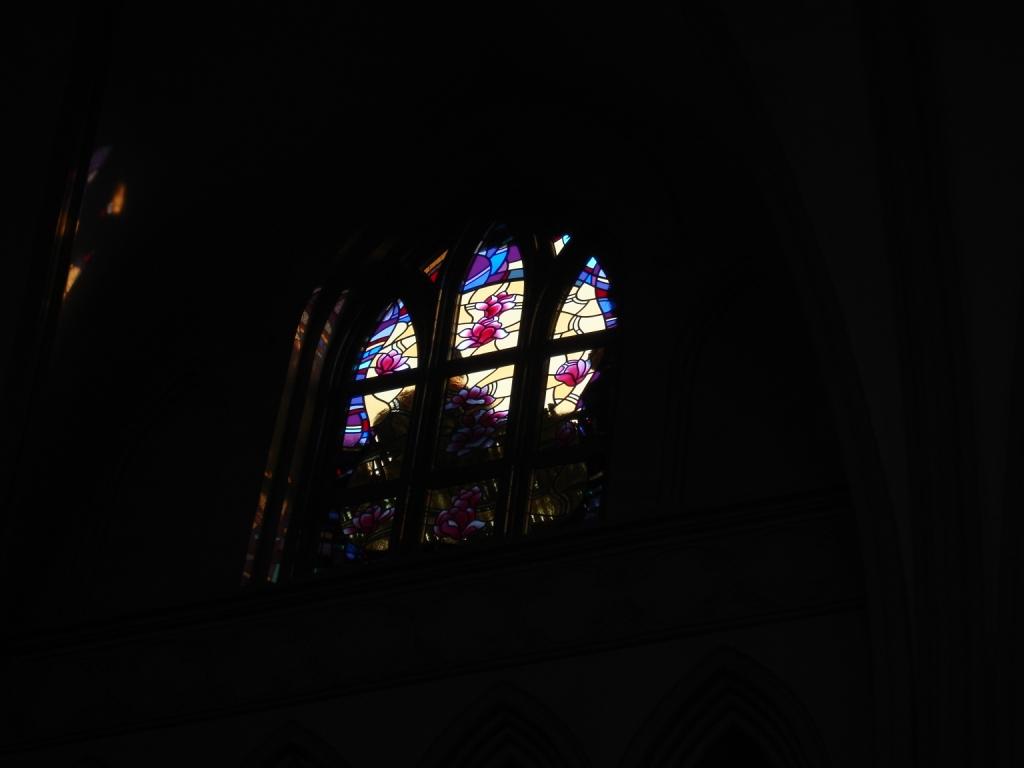 Stay tuned for additional photos over the course of the next couple of weeks. Or, better yet, stop down to the cathedral and have a look for yourself.

UPDATE 11/26: A few additional photos from day 2 of the install. The left side of the nave is now complete; the left side of the transept will be finished off tomorrow. Timing of the right side depends on just how quickly the scaffolding can be erected, but it should be next week. No reason not to stop down and have a look … the cathedral is open during the days, so you can take a seat in the pews and watch the panels as they’re installed. Anyway, some extras …

Here, workers are carrying the individual window panels up the scaffolding. One word: rickety. Definitely not OSHA-approved. 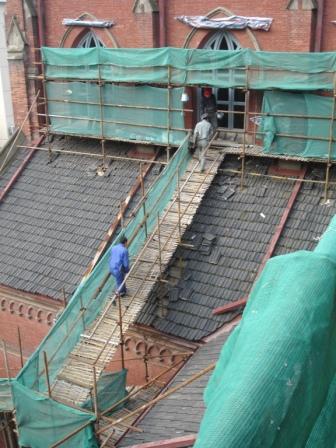 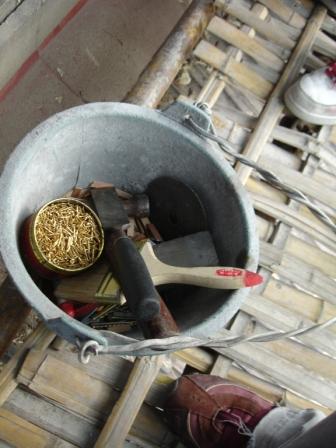 Oil and perspiration attract dust, and since the new windows are unlikely to be dusted for many, many years, workers wipe them down, constantly, right up to the moment they are placed in their frames: 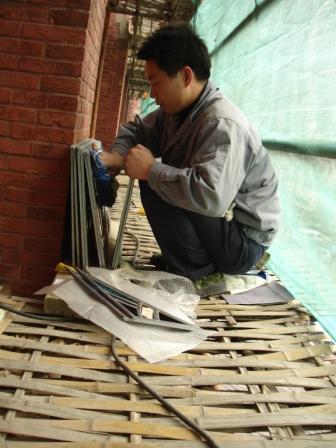 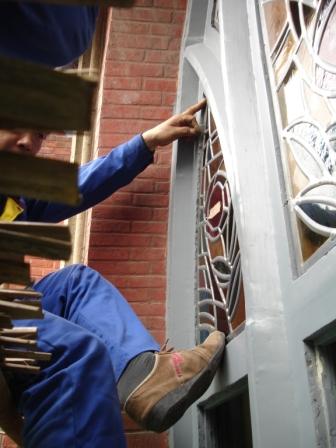 I’ve received quite a few requests to show the new windows themselves, and so – with some reluctance – a couple of additional images. But please keep in mind two things: first, scaffolding is erected behind the windows, and thus blocks out much of the light that will come through when it’s removed; and second, it’s not yet possible to obtain an image across from the windows – until next week, when the scaffolding is erected for the parallel windows. 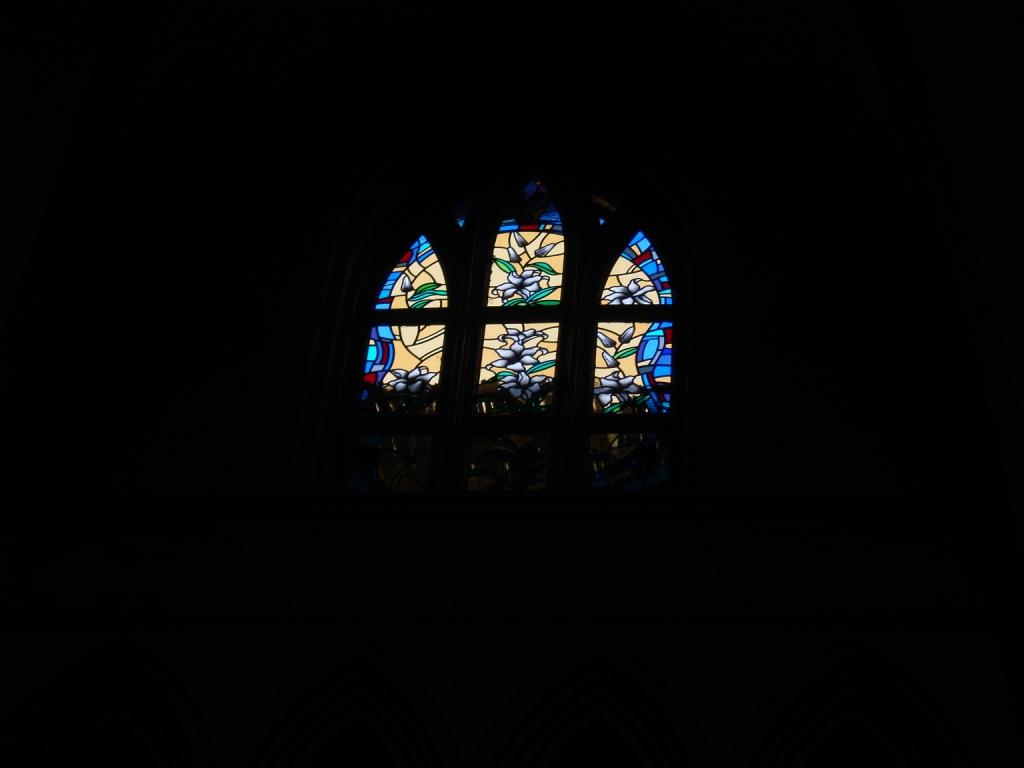 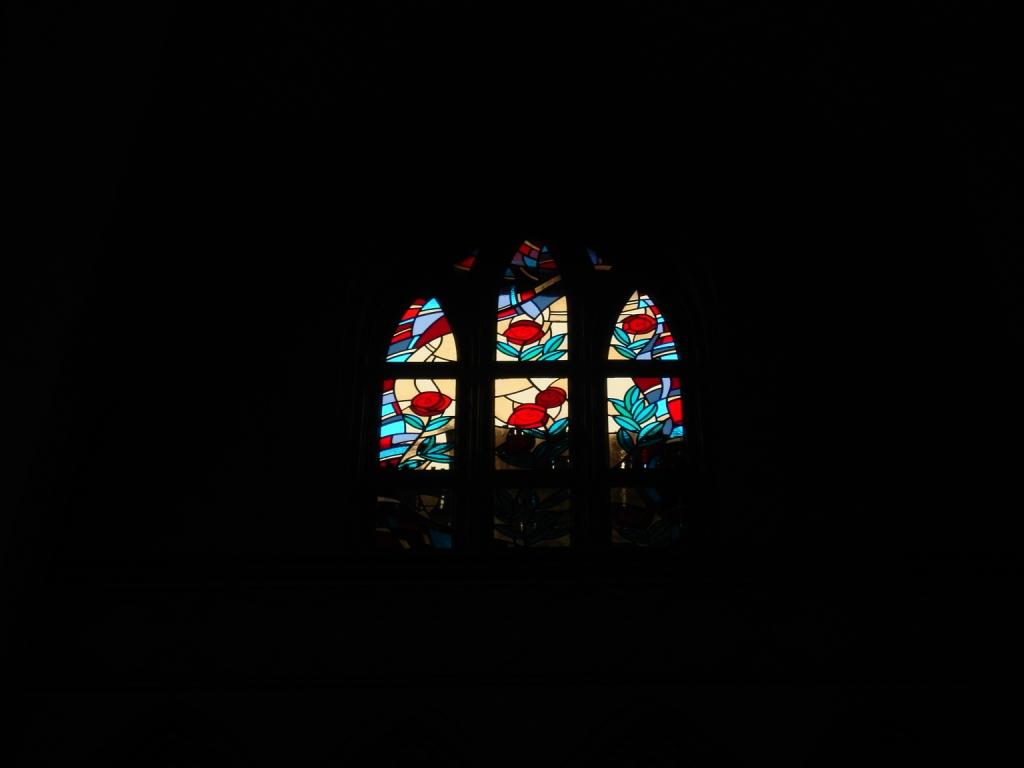 [Updated 11/27] A total of nine banks of windows were installed over the course of the last three days. It’s a marvelous privilege to be allowed to get close to this process. But it is also, I must admit, a repetitive process. So, at the end of this third day, Thanksgiving Day, which was marked by the completion of the left side of the transept, just a handful of photos to fill in the gaps.

I’ll start, once again, with the scaffolding. Both of these shots speak for themselves, I think: 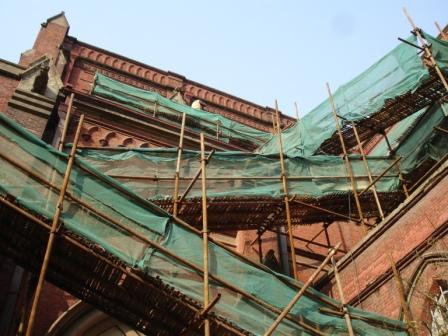 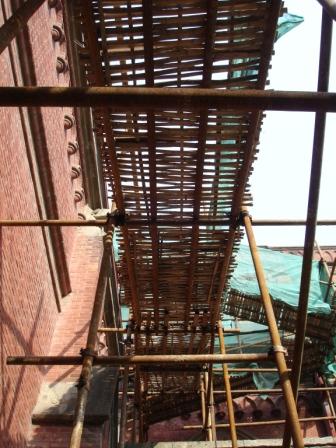 The next two images show the installation of the very last of the transept bamboo windows. I include them because, if you look through the open frames, you can see two of the three bamboo windows that were installed last year, on the opposite side. The new ones have very similar designs, but with some variation in the patterns. Click for enlargements: 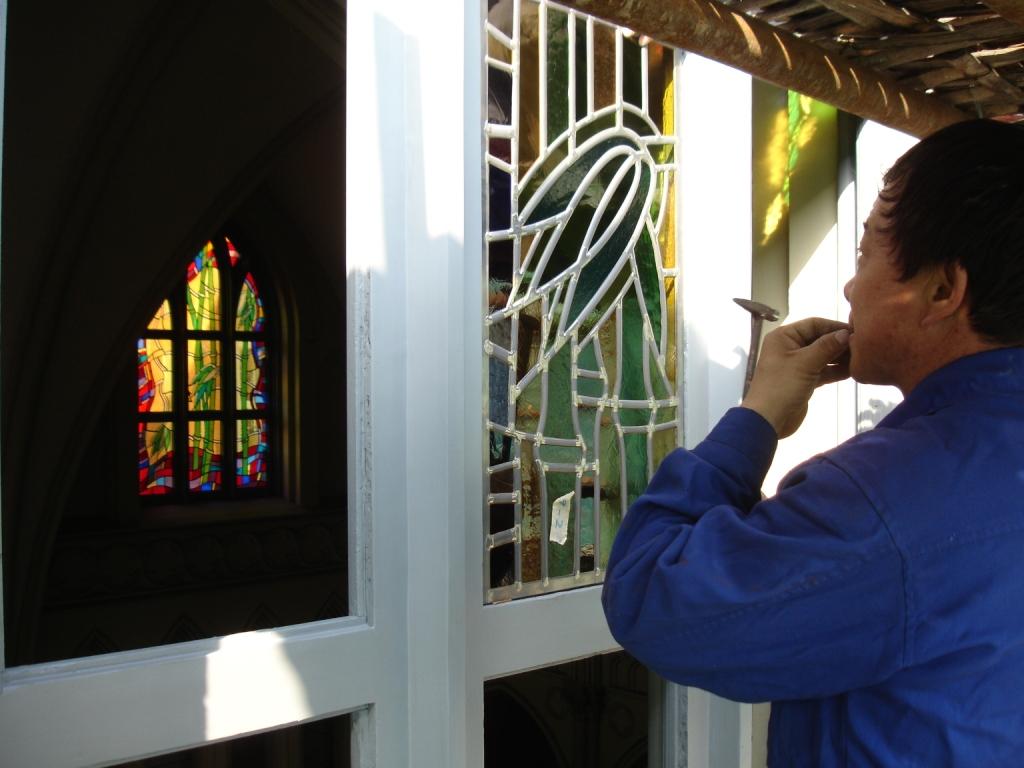 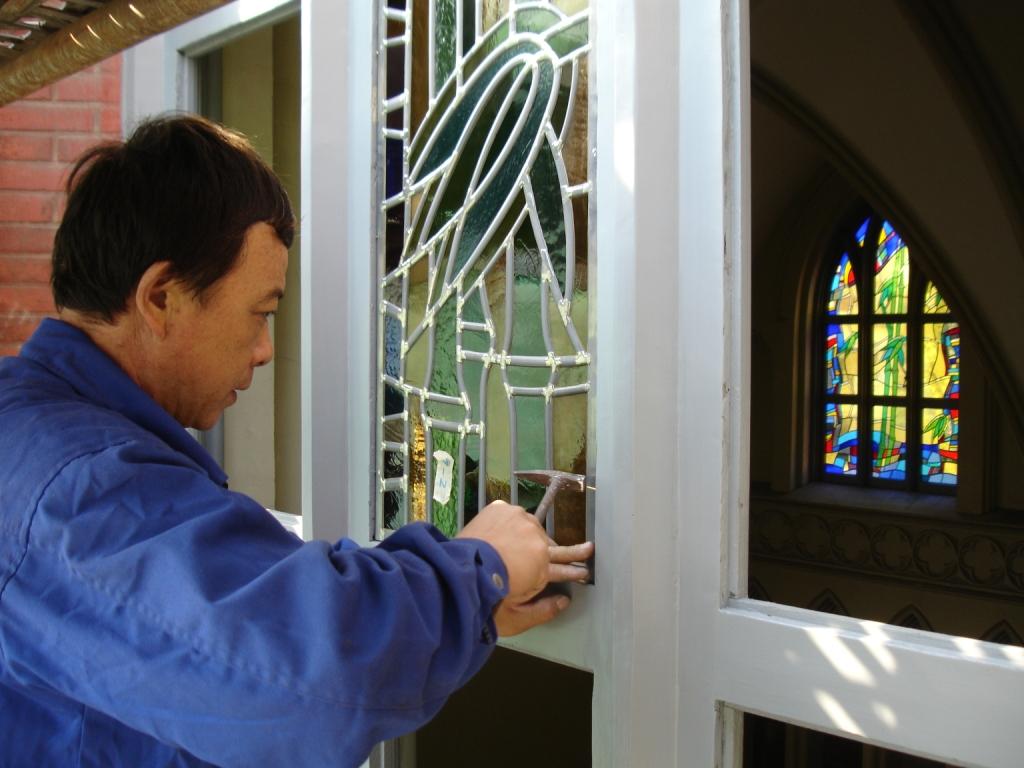 And finally, the last panel as it was gently nudged into its frame. With that, the left side of the cathedral’s upper register is complete. 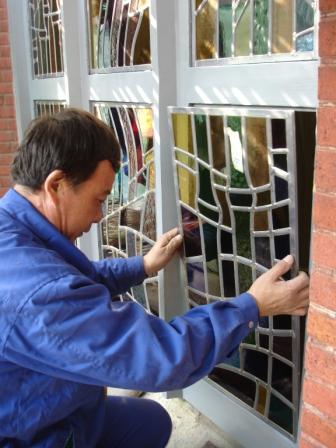 The right side installation will begin next week – though the date is a bit murky. I’ll definitely post some images, as well as some higher-quality photos of the windows that were installed this week. Stay tuned …