[UPDATE 1/08: Additional, corrected information on this redevelopment can be found here.]

[Cross-file under: Poor Powers of Observation, Bloggers and Journalists]

Below, a December 27 image of a wrecking ball demolishing the north end of the convent building once occupied by the Shanghai members of the Sisters of Carmel. Built in 1874, it was (and, as of yesterday, part of it still stands so, is) one of the oldest buildings of any type (Western or Chinese) in Shanghai. 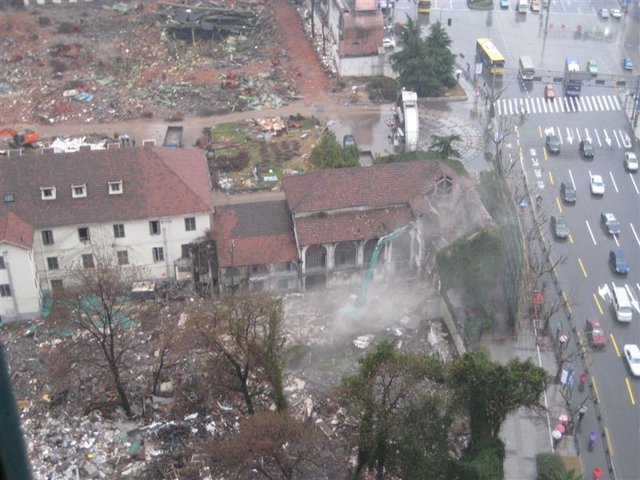 When I arrived at the scene, not long after the wrecking ball left (for lunch?), with most of the building still to be demolished, I found a young man with a camera who looked at me, identified the building as “the sisters of Carmel” and added: “The government! What can we do?” Indeed. So, having recently fashioned myself as a blogging journalist, I decided to get to the bottom of this matter. Questions to be answered: What cretin would knock down one of Shanghai’s oldest buildings? And for what purpose? Could this be yet another example of Shanghai bulldozing its history to make way for man-bag carrying real estate developers?

To answer, we’ll need some background on the history of the Carmel sisters, and their convent, in Shanghai.

On February 3, 1869, five Carmelite nuns arrived in Shanghai via sea and were carried – via sedan chairs – to the Xujiahui neighborhood which had already become a thriving center for Jesuit missionaries. The Carmelites resided with nuns from other orders until December 8, 1874, at which time they moved into their new convent, then named St. Joseph’s Convent of Carmel (part of which is being demolished in the above photo). Below, an undated image of the convent (most likely, 19th century) from the marvelous “Zikawei in History” published by the Shanghai Culture Publishing House [click the image for an enlargement]. 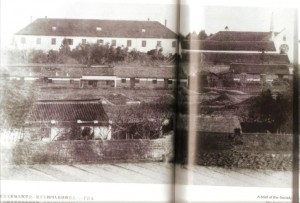 The life of a Carmelite nun is strict and challenging. The day is spent, as much as possible, in silence and – as much as necessary – work. Thus, the order attracts a very special, very select number of women. Add in the hardships of 19th and early 20th century Shanghai (climate, typhoid, malaria, that Boxer Rebellion, etc) and you’ll whittle down the population even more. Case in point: In 1900, the convent was home to sixteen Chinese, and nine foreign Carmelites. In 1948 it was down to 18 nuns; and near the end, in 1950, it was down to eight Chinese and six foreign nuns.

In any case, there wasn’t anything terribly spectacular about the life of a Carmelite in Shanghai. Keeping with the austere nature of their order, the convent in Shanghai was simple. There were no fancy railings or mouldings in the corners. It was shelter, pure and simple. In fact, by all accounts, the most notable aspect of the convent was its high walls, initially designed to be higher than any surrounding buildings. In the below photo, you’ll see one of those original walls to the very right of the image. 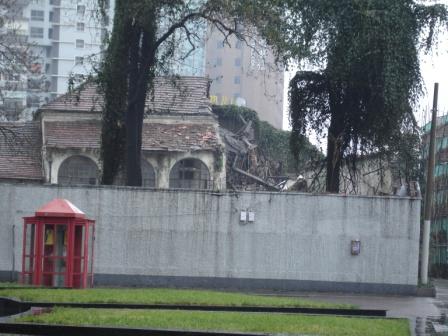 Now, a curious thing about the above image: it was taken nearly two weeks after the wrecking ball took down the right half of the building (as seen in the first photo in this post). During the intervening two weeks, I made several phone calls, to people whom (I thought) should know something about this matter, asking whether the convent was being demolished. And the answer that I received was always the same: “they” said they’d preserve some of it.

By the late 1950s, the Catholic Church (and other religion in China) was severely hobbled by the consolidating power of the Communist Party. For the most part, foreign clergy – including nuns – had been deported or, in a couple of very tragic cases, imprisoned. Meanwhile, the Church’s vast property holdings were coming under the control of the Party, a process that was completed during the Cultural Revolution. Many of those properties were destroyed (so, for example, there used to be a church attached to the Carmelite convent). When suitable, others were converted into other uses. And so it came to pass that Shanghai’s Carmelite Convent, was taken over by the Shanghai Film Studios, unquestionably the most important Chinese film studio of the last fifty years (just get a gander at imdb’s a list of productions filmed there).

In 2001, Shanghai Film Studio was swallowed by the Shanghai Film Group, and the old facility in Xujiahui was judge outdated and insufficient for the Group’s growing production needs. Which brings us to the image, below, of the demolished studio complex, and the old convent building’s place within it before the wrecking ball. 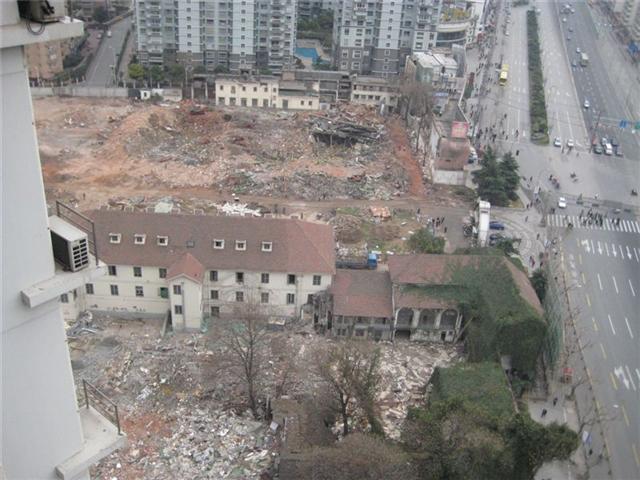 As it happens, many of the Church’s properties in Shanghai were returned to it, beginning in the 1980s. But many – especially those which had been given other uses deemed important – were not. The convent is in the latter group. And yet, for reasons known only to them, the Shanghai Film Studio preserved the buildings for all of these years. I’d like to think that somebody, somewhere, appreciated them as an important, living artifact of Shanghai’s rapidly disappearing history. Certainly, a film studio (always on the look-out for shooting locations) would appreciate the importance of these buildings, wouldn’t it?

Anyway, for the last two weeks, the demolition has appeared on hold. Meanwhile, I’ve been probing sources, trying to find out what’s happening. Then, a few days ago, a friend emailed to tell me that the old dormitory building – the large one on the left – was being gutted. I’ve seen too much of old Shanghai fall during my time in this city, so I held off a couple of days before going down there. When I did, on Sunday, this is what I found: 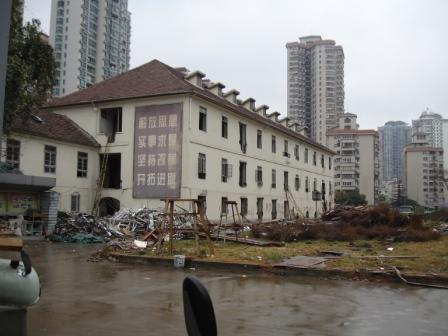 I’ve witnessed my fair share of Chinese demolitions, and to me this looked like the gutting of any and all recyclable materials (scrap!) before the wrecking ball. I’ll admit, my indignation was rising; my camera was snapping; and I was mentally preparing the accusatory blog post that this crime against history so richly deserves.

But then I backed up and noticed – hanging from the old gate to the Film Studio – was this blueprint (click for enlargement): 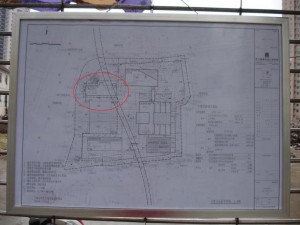 In case it’s not clear: that’s a blueprint for the upcoming Shanghai Film Center, complete with archive buildings, offices and – in the red circle added by me – the old Carmelite dormitory serving as a renovated museum. The part taken out by the wrecking ball is not part of the renovation.

So, overlooking, for the moment, my poor powers of observation (I’d spent two weeks trying to find out what was going on, and there it was, right in front of me) – that’s progress. Yes, it’s a pity that they couldn’t preserve the entire building. And the gutting of the old dormitory isn’t exactly gentle (then again, the inside of the convent was, by all accounts, austere). And yes, above all else, the building should have been returned to the Church years ago. But even taking all of that into account (and it’s a whole lot to account for), it’s hard to look at the preservation of this dormitory as anything but a step in the right direction. Certainly, it’s not going to be preserved with the same care and responsibility as it would be if, say, it were in Paris. But Shanghai isn’t Paris, and considering the rocky path that religion, and historic (Chinese and Western) architecture have faced in this city, this can only be considered a step in the right direction.

[For an example of stepping in the very wrong direction, look here.]