This is a China blog (and, sometimes, ahem, a Northwest Airlines blog), and I’ve tried to exercise some editorial discipline in maintaining that focus. But, truth is, I have other interests, and it wasn’t so many years ago that I was writing about some of them. So, in a rare break from protocol, please allow me to draw your attention to the first essay that I’ve published (in a year?) that doesn’t include the word “China” in it:  “Minnesota Re-re-recount“, an Atlantic Online dispatch from the US Senate election contest between Norm Coleman and Al Franken currently ongoing in St. Paul, Minnesota (next stop: my long-awaited essay on the virtues of 70s AM radio). 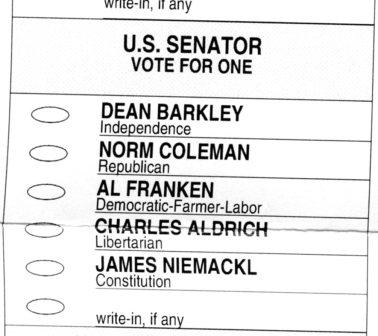 For those of you uninterested in the intricacies of US Senate recounts, I recommend – with real enthusiasm! – David Bandurski’s superb translations of two “congenial” points of view on Chinese-American relation over at the China Media Project. One of the better China-related blog posts that I’ve read in some time (h/t Granite Studio).

[My current state of mind in two minutes or less, here.]

[Update 2/6: Based upon a brief review of a handful emails sent to my contact form, partisans of Franken and Coleman (both of whom now assume that I’m against them) are far more likely to send anonymous, presumptious, tirades/emails than your average fenqing worked up over what I may or may not have meant in a post related to, say, T!bet. I’m just saying.]