Here’s something that I’ve learned: the world has two cultures of recycling.

In the developed world (Europe and North America, in particular), recycling is a moral act, done – primarily – as expatiation for consumption. Little to no consideration is given to the cost of recycling; and, on those rare occasions when economics enter the discussion, they often do so because an entity – say, a city recycling program – suddenly finds itself in need of a subsidy to continue running a government-chartered recycling program. The average citizen rarely considers the economic value or cost of his or her sorted paper, cans, and bottles; sorting such materials is a civic duty.

Meanwhile, in the developing world, recycling is an economic act, done primarily for income. Little to no consideration is given to the environmental benefits of recycling; on those rare occasions when the environment enters the discussion, it’s a side-benefit, often utilized as a marketing ploy by companies seeking more valuable recyclables for less money. The average citizen (say, in Shanghai), rarely considers the environmental benefit of selling his or her paper, cans, and bottles to the local scrap peddlers. Almost to a person, he or she is concerned with obtaining market value from an item that has value – to someone else.

I’ve written about this topic in other places, and I’ll be writing more in the coming year. For now, though, I’d like to repeat a story: a good friend, from Hunan, likes to recount how people from her small town warn school age children that – if they don’t study hard – they’ll end up as scrap peddlers, picking through trash to find value in other people’s garbage. That is, in rural Hunan, recycling is what you do if you’ve failed at everything else.

Today I thought of that story, the people in that small village, and what they might have thought about this Wednesday event at the University of Minnesota (as reported by the Star Tribune):

After a garbage truck dumped its full load in front of Coffman Union, student volunteers pounced on the pile — about 10 feet tall by 20 feet wide — and pulled out all of the material that could have been recycled but ended up in the trash instead.

Below, a screen capture from the Star Tribune’s accompanying video: 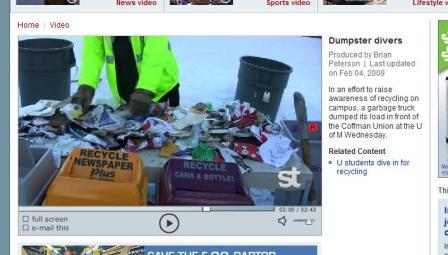 A couple of points, here. First, I’m willing to bet a sizable sum of money that you’ll never, ever find a group of Chinese university students digging through a 6 ton pile of garbage (at their college, or elsewhere). I could give a long list of reasons, but the one that I’d like to focus on is this: trash sorting is a job in China, and it’s one that Chinese students don’t want. It’s not about virtue; it’s about work, status, and money. In Shanghai, for example, the city is dotted with trash dumps that employ hundreds of migrants, and poor locals, who sift through the municipal waste stream in search of value, and thus recycle it to a degree unimaginable and unattainable in developed countries. Below, an image of a small-scale facility along these lines, along the Li River, in Guilin: 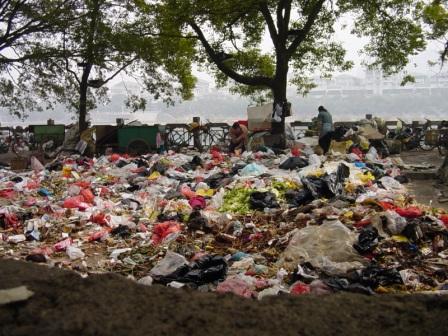 In China, and other developing countries, the only reason that anybody would do this kind of work is pretty simple: they need money.

I bring this up because, over the last month I’ve fielded more than a dozen phone calls from reporters worldwide seeking explanations for why China has stopped buying recyclables out of Europe and North America. And the one thing that I’ve found difficult to get across – in some cases, nearly impossible – is that China isn’t interested in purchasing worthless raw materials from the developed world, even though those materials might have been collected and sorted with the most noble of environmental intentions.

Of course, it’s not only China that feels this way. Processors of recyclables in the developed world, too, have stopped buying, and they’ve stopped for the same reasons: they don’t need any more raw materials.

In any case, it’s commonplace for environmentalists in the developed world to demand that China begin to think more “green.” Fair enough, I suppose. But I think that there’s an equally good argument to be made that – in regard to recycling, at least – the developed world would be well-advised to starting thinking about recycling in terms that aren’t moral.