Over the last six months, countless media outlets have run stories on China’s role as the world’s biggest recycler, and thus its role in the Fall 2008 collapse of the international scrap recycling markets. Of those stories, a very high percentage mentioned the alleged, October 2008 kidnapping of a British scrap trader by a state-owned recycling company in Ningbo, first reported on Shanghai Scrap. It’s a good, if largely symbolic story that – from my perspective – represented the intense mistrust and anger that developed between Chinese scrap buyers and their suppliers (and brokers) in the US and Europe in late 2008. And, like many such stories, the kidnapping story was done and done, and by January – in my opinion – it was pretty much done.

So go figure, yesterday, the day that I re-start regular posting after an extended hiatus, I receive two documents that justify one last scrap kidnapping post. News-wise, there’s nothing new in either of them. They are only of interest insofar as they illuminate the damage control strategy adapted by a major state-owned enterprise and, in the process, illuminate two topics in which I take more than a passing interest: a) the assumptions and practices that entrenched, state-owned Chinese companies carry with them as they globalize, and b) the related problems that arise when they try to manage international media with the same tools that they use/d to control state-owned media in China.

Before getting to documents in question, a brief summary of the kidnapping (a more detailed account can be found by following the links associated with my original post). In October 2008, Anil Srivastav, a trader with Goldarrow, a British scrap metal trading firm, traveled to Ningbo to collect moneys owed to the company for several containers of scrap metal that were shipped to Ningbo Yibao, a trading company associated with Ningbo Zhenhai Guanghe Metal Recycling company – itself a branch of Zhenjiang Province’s largest state-owned company. Srivastav met with James Xu, Ningbo Yibao’s chief trader, and someone with whom he had done business on several occasions in the past, and was informed that – in fact – Goldarrow owed money to Guanghe. Srivastav’s passport was seized, but he managed to escape into the night, to Shanghai. Unfortunately for him, Ningbo police tracked Srivastav to Shanghai’s Pudong Airport, dragged him back to Ningbo, and then held him, under guard, in a hotel for several days. The situation was only resolved when Goldarrow agreed to cede ownership of several containers of scrap metal – worth roughly $350,000 – to Guanghe in return for Srivastav’s release.

Since then, Goldarrow has stood by its claim that the event was a kidnapping, and Guanghe, Ningbo Yibao, and James Xu have asserted that it was nothing more than a “trade dispute” resolved in a slightly unorthodox – by international standards! – manner. This latter position commands an unusual level of sympathy among many otherwise sane Chinese scrap traders who – in various venues – have explained to me, patiently, that “this [kidnapping] is a very effective way to resolve business disputes in China” and “it can’t be a kidnapping if someone was already owed money.” There’s some truth to the former statement, actually: it’s a poorly held secret that abduction is, in fact, an oft-utilized bill-collecting tool in China, and truth is that if this incident had been between two Chinese scrap traders, nobody would have noticed or cared. But Guanghe’s mistake was thinking that it – a politically connected state-owned company – could handle an international dispute with the same kind of muscle it reserves for its vendors in Zhejiang.

With that in mind, I present, first, Guanghe’s account of what happened in that hotel room. The document is dated 26 November, 2008, but I only saw it for the first time yesterday. Perhaps it’s been circulating and I just didn’t know about it (if anybody has seen this before, I’d love to know). In any case, here are the three pages in thumbnail form. Click each for an enlargement:

A general point, first. Nowhere in the Guanghe account do we find reference to James Xu’s employment with Ningbo Yibao. Instead, he is described as “an introducer of this business and translator.” That is, by this letter’s account, he is not an employee of Ningbo Yibao (that is, an employee of the same organization to which Guanghe belongs). This is, to put it mildly, preposterous and easily refuted by looking at other correspondence associated with this case (including correspondence dated Monday). But, preposterous or not, it’s clear that Guanghe – the company that collected Goldarrow’s money – was taking the simple strategy of scapegoating a low-level employee to protect the high-level employee who actually extorted the money. I believe this is called “changing the subject.”

In any case, the real kicker here, the passage that indicates just how badly Guanghe needs professional PR help, is this one, describing the circumstances of the Srivastav abduction, and the subsequent resolution of the issue. Keep in mind, again, that Guanghe is the largest state-owned company in Zhejiang:

… we send someone to bring Mr. Anil Srivastav back to Ningbo [from Pudong Airport] and reported to Zhenhai Police Department for crime of economic fraud. Zhenhai police department enquired Mr. Srivastav from Goldarrow and Mr. Meng Zhenghui (Guanghe’s president) from our company and took notes. With the mediate of Zhenhai Police Department, Mr. Anil Srivastav and Mr. Meng Zhenghui made an agreement …

Got that? A police department in Zhejiang Province mediated a commercial dispute between Zhejiang’s largest state-owned company and a British company and – lo and behold! – the British company had to relinquish rights to $350,000 in merchandise before it was resolved (and their trader could be released from the mediation).

For the purposes of this post, and future seminars on doing PR in China, let it be noted that somebody at Guanghe considered this to be a perfectly reasonable explanation for the company’s conduct.

Which brings me, then, to a document released on March 30, by Guanghe, that must be considered an absolute classic in the history of bone-headed PR strategies. I’m not sure what inspired Guanghe to issue this, but I suspect that the company recently found out that there isn’t an American or European scrap trader on Planet Earth willing to do business with it, anymore. And that just won’t due for a company built on imported scrap, and suddenly desperate to involved in supplying raw materials to China’s stimulus-induced building binge. So here we go, full-size: 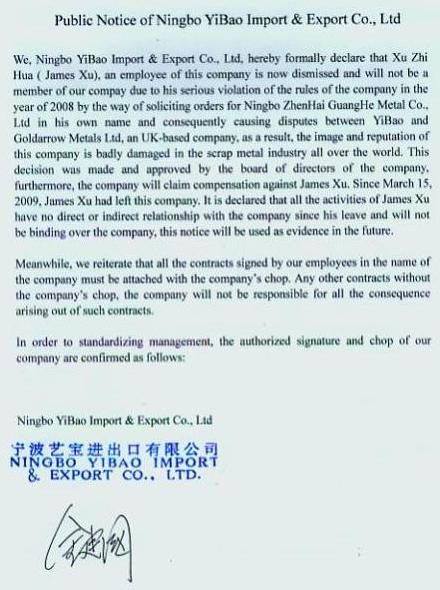 The key passage is this one:

[James Xu] … an employee of this company is now dismissed … due to his serious violation of the rules of the company in 2008 by way of soliciting orders for Ningbo ZhenHai GuangHe Metal Co. Ltd. in his own name and consequently causing disputes between Yibao and Goldarrow Metals Ltd …

So, to summarize: Back in November, during the initial backlash against Xu and Guanghe, Guanghe decided to claim that Xu was never an employee, but only a friendly “introducer.” When that didn’t improve their image, the company shifted gears and announced that the whole Goldarrow deal was actually Xu’s doing, without authorization, and thus, he’s fired.

As a PR strategy designed to restore the reputation of Guanghe, this works only if the people you are trying to convince are Chinese state-owned reporters who have no choice but to report the truth as you declaim it. But as a strategy for convincing the international media who jumped on the issue in the first place, it’s worse than saying nothing at all. Especially if, as I found out, the fired maybe former employee has a different perspective on what happened. Here’s how James Xu answered my emailed questions about Guanghe’s public notice. Briefly: James speaks excellent English, but his written English is a bit jagged. I publish his full, uncorrected answers in the interest of accuracy:

A. Not for all,i left YIBAO Because my contract of employment was overdue untill last month and don’t want to work for NINGBO YIBAO.

Q. If not, what statements are inaccurate?

A. See my below Dimission Statement!!! [the “dimission” statement follow the q&a]

Q. Is it true that you solicited orders for Ningbo ZhenHai Guanghe Metals in your own name?

A. No,i just helped Ningbo Zhenhai Guanghe to buy the problem mixed heaves [mixed heavies is a term of art, a type of scrap metal that Guanghe claims that it contracted instead of what it received] from Goldarrow Metals Ltd,i was only a introducer.

Q. Did you solicit orders from Goldarrow in your own name?

A. As i said many times,i only as a introducer in that case,the contract of mixed heavies was made between NINGBO ZHENHAI GUANGHE and GOLDARROW METALS,Pls see the attached contract
Q. If you are no longer working for Ningbo ZhenHai Guanghe Metals, who is your current employer?

A. I am free now,no employer at moment.

[what follows is the “dismission statement”]
Dimission Statement:

My contract of employment with NINGBO YIBAO was overdue on 15th March, 2009. I would like to take this opportunity to appreciate your great supports sincerely. I was enjoying my working time in NINGBO YIBAO. Thanks to NINGBO YIBAO’s cultivating in the past 4 yards.

I am so sorry for causing such a big trouble to NINGBO YIBAO because of the case I was an introducer between NINGBO ZHENHAI GUANGHE METAL and GOLDARROW METALS. Hope everyone already had knew the truth of that case. After my leaving, the other buyers in NINGBO YIBAO will contact you for future business and hope you will build happy business relationship.

Great thanks and wishes to you!
——————————-
And with that as the sorry, sordid conclusion, I’m officially leaving the Ningbo scrap kidnapping beat. No more posts, period.

Next stop: radioactive scrap in China (and, just maybe, stop-over to marvel at the greatness of Syd Straw’s 1995 “War and Peace” album).