The second half of 2009 includes all kinds of anniversaries that seem to have the Chinese government – and much of the population – in a tizzy. Here at Shanghai Scrap, we’re in less of a tizzy, but we understand, believe me. Nonetheless, we are of the opinion that the most important date on the 2009 Chinese calendar  has nothing to do with politics, but is, instead, ordinary old Wednesday, July 22. What, you may be asking, is so important about July 22, 2009? Well, at 9:35 AM, local time, Shanghai is going to experience an unusually long (five minutes or so) Total Solar Eclipse. And, at a bare minimum, that’s gonna make for one hell of a Wednesday morning rush hour.

Hopefully, though, it’ll be something much more (we’re going to have much more to say about it in the coming weeks). So, in the interest of getting the ball rolling, Shanghai Scrap is proud to point interested readers to NASA’s eclipse website, and its extensive coverage of this event. It includes a nifty interactive map of the eclipse and, below, a NASA map of the shadow as it’ll cross over the Shanghai region (click the map for a detailed .pdf). We’re gonna be right in the middle of this thing, folks. 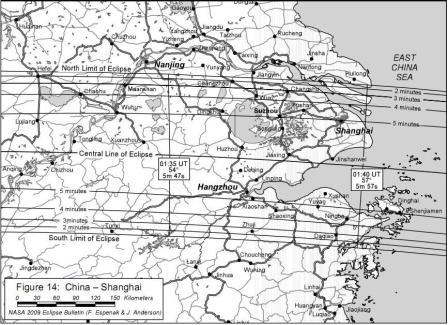 Here at Shanghai Scrap, we’re in no position to guess at the economic effect of the eclipse (anybody out there in a position to comment on the role of eclipses in Chinese astrology?), but I’m sure that at least a few hotels south of town are going to be deeply appreciative of eclipse tour groups, like this one, that have been scouting the Shanghai region for appropriate viewing areas since last year (check out this amazingly detailed scouting report). Here’s wishing clear skies and no visa problems to all of them.

[For the time being, Shanghai Scrap is unwilling to disclose the location from which the staff will be observing the event. But trust me, it’s premium. By the way: with this post, I’m coming clean about being a lifelong space geek, and adding a new “Universe” category to the blog.]