Shanghai Scrap remains agnostic as to whether or not H1N1 is being hyped all out of proportion to its danger. But Shanghai Scrap is not agnostic about whether or not H1N1 hype is dangerous to the media and those who feed it information. Case in point: late this afternoon, Hong Kong confirmed that its first H1N1 case – a Mexican national – arrived in the city on Thursday, after transiting through Shanghai earlier in the day (h/t to Sky Canaves). As it happens, there aren’t many direct flights between Mexico and Shanghai, and the only one that arrived on Thursday (Mexicana Airlines AeroMexico098) was subject to a thorough health check – and even more thorough media coverage througout the Shanghai media. To be clear: nobody has yet confirmed that the infected man was on the Mexicana flight, but if he was, then many, many people are going to have reason to regret this story (and the Chinese versions that appeared all over Shanghai over the last two days): [UPDATED 5-2: Shanghai Daily is reporting that the infected man did, in fact, arrive in Shanghai via Mexicana Airlines AeroMexico 098]: 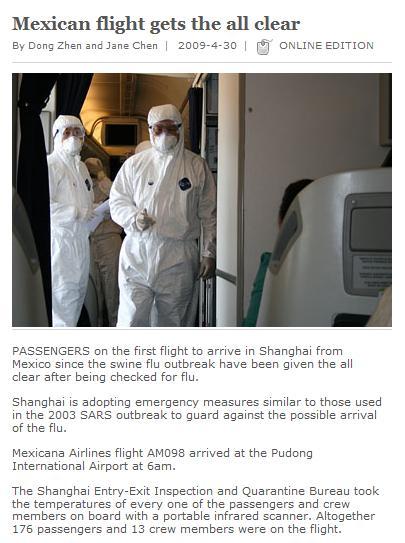 I don’t intend this post as an effort to make light of the efforts that the Shanghai government is making to prevent the introduction and spread of H1N1. Those are laudable. But I think that there are a couple of important take-home lessons from the above story (again, assuming the Mexicana flight carried the infected individual), and others like it that ran in Shanghai during the week. First, and most unsettling, H1N1 can remain asymptomatic for the duration of a trans-Pacific flight (Mexico City to Shanghai ~14 hours). This shouldn’t come as any great surprise, of course, but it’s no less disturbing to realize that a plane full of technicians in bio-hazard suits couldn’t detect an H1N1 carrier. Second: this is what happens when state-controlled media are called to the airport at 6AM and told to cover an event, no questions asked, with the purpose of assuring a nervous public that the government is “doing something.”  To be fair: I have no idea whether or not foreign reporters would have bothered to ask the relevant questions (“How are you going to pick up the carriers who aren’t running fevers?”), but at least the potential exists. And in defense of the Chinese reporters, at least one – Dong Zhen of Shanghai Daily – noted the absurdity of the exercise, writing: “Most of the arrivals seemed to be in a relaxed mood though they were a bit surprised by the intense media interest.” I bet.

[I realize that, by posting this before having confirmation exists [UPDATE May 2: Confirmation now exists.] that the Mexicana flight carried the infected man, I risk my own stumble. Then again, it remains very much the case that – one way or another – an asymptomatic individual passed through a major international airport’s H1N1-related health screening system on Thursday, en route to another destination. And, no doubt, Shanghai Pudong wasn’t the only airport where that happened.]

[Predictable Update – May 2: China suspends all flights between Mexico and Shanghai.]