On Friday afternoon I arrived at the registration desk for an international conference being held over the weekend in Ningbo (by car, roughly three hours southeast of Shanghai). The attendant checked my name off the attendee list, handed me my delegate badge, a tote bag containing a directory of attendees, a bound copy of the conference presentations, several magazines – and the vial of six vitamins pictured below: 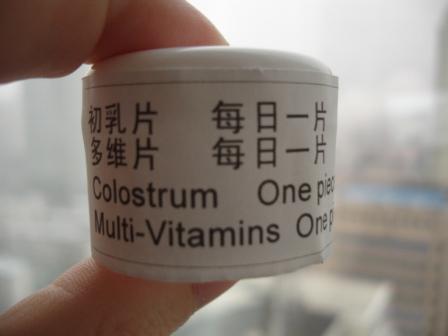 “It is because of the H1N1 flu,” the attendant told me. “You should take two every day.”

I must’ve made a face of some kind, because she pursed her lips, tightened her brow, and added: “It’s the government’s suggestion, and we think it’s a good one. But it is up to you. We give you the choice.”

As it happens, attendance at this conference was negatively impacted by the H1N1 scare, and so I suppose it’s understandable that the organizers would want to reassure their still sizable number of attendees (roughly 300, I’m told). Whether vitamins will make a difference – I’ll leave that to the physicians.

Anyway, I post this item as a curiosity, but also as a contrast to my experiences in China during the SARS epidemic of 2003. Then, unlike now, the government was heavily criticized (and rightly so) for its delayed, anemic response to a very real health crisis, and its subsequent effort cover it up (the epidemic, and the anemic response, that is). The response to H1N1 couldn’t be much different, and for those who find the H1N1 objectionable/too cautious/ridiculous, I humbly suggest that it can’t be fully appreciated (much less, writtenabout) without the context of what happened in 2003. Mistakes were made, and now – for better or worse – they’re being avoided, and perhaps (it seems obvious to me, at least), over-compensated for.