I’ve spent the better part of a week in Japan, now, visiting some of the most advanced recycling facilities in the world. In some ways, it’s been exhilarating: Japan’s strict regulatory structure ensures that the most difficult wastes – say, automobiles – are recycled as far as current technology and economics allow. At the same time, though, I find myself increasingly despondent: despite all of the technology, will, and expense, the simple fact is that a significant part of the first world’s waste isn’t recyclable. Sometimes, it’s just too hazardous; sometimes, there’s just nothing that can be made from a synthetic material after a first use; sometimes, the costs are just too high; and often, the problem is some combination of the three. I’m not talking about nuclear reactors here, either: I’m talking about hybrid automobiles (yes, that Prius), air-conditioners, washing machines and the other accessories of daily life that – for better or worse – many of us assume float into some sort of Green Heaven if we just drop them off at the local recycling station. Below, an image taken in one of the best and biggest television recycling plants in Japan – and that means, one of the biggest and best in the world. 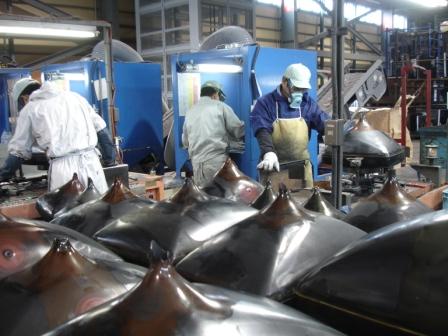 Longtime readers of this blog know that I’m sympathetic but highly skeptical – and even critical – of some of the more outlandish claims made by environmentalists in favor or recycling. That’s not to say that we shouldn’t recycle. Goodness knows, Tokyo is better off for having its televisions recycled to a (world beating) 50% recovery rate than having them dumped into a landfill. But that’s still 50% if you do everything correctly in the world’s most advanced recycling economy. I think the environmental community, and the recycling industry, could do a better job at informing people about these returns.

Meanwhile, China – the world’s most ambitious recycling economy – has spent the last five years or so promising its citizens and companies that it would begin to implement something called a “circular economy” over the next decade or so. I wish the officials and companies involved in this noble effort nothing but the best in their quest, and over the next 18 months or so I hope to highlight both the possibilities – and the limits – of such a system.