Unless you trade in non-ferrous scrap metals, you probably weren’t aware that this was a problem. But let me assure you that it is a big problem, indeed, and if you have any interest in how business works in south China, the origins of this mess should interest you.

First,  a bit of background.

Ever since China began importing scrap metal in the mid-1980s, south China has been the preferred port of entry for a broad class of low-grade loads of mixed scrap recyclables. These range from electric motors, to insulated cables, and loads of – yes – mixed metals. Why? Taxes. For twenty years (with a few interruptions) Guangzhou Customs has accepted lower declarations on the value of imported mixed metals than other ports in China. Let me explain how this works. 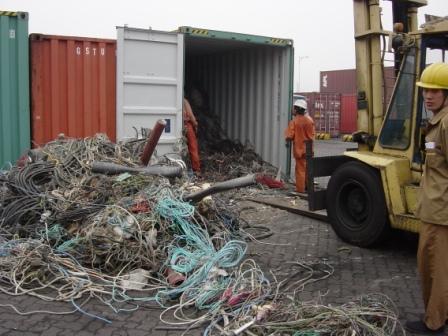 Say you have 5 kg of aluminum ball bearings, and 5 kg of steel ball bearings. To make this simple, let’s say that the aluminum bearings cost $1/kg, and the steel bearings cost $.10/kg. The correct value declaration on the two loads of bearings would then be $5.50. But say you take those bearings, mix them together in a bucket, and then present them to a customs agent with a declared value of, say $2.80 (claiming two kg of aluminum and eight kg of steel) – what are the chances that the Customs agent is going to pay someone to sort through that mixed pile in order to determine whether or not your declaration is true?

As it happens, there are ports in China where the Customs officials will bother to make sure that your declaration on those bearings is true. But Guangzhou is not one of those ports and, as a result, south China importers have been saving thousands of dollars per container on taxes for two decades. And that’s why, more than any other reason, Guangdong has become one of China’s – and the world’s – leading centers for the processing of mixed metal scrap over the last twenty years.

To be sure, every year or two, the central government gets fed up with the loss of tax revenue (and other ports and regions get fed up with the loss of business) and cracks down on the low declarations. But, invariably, everything goes back to (ab) normal within a few months. South China’s mixed metal processing industry is massive, and nobody – nobody – wants to be responsible for shutting it down.

That is, nobody except the new director of Guangzhou’s Customs District. Earlier this year, the District decided that enough was enough, and they were going to rectify the fraudulent declaration system once and for all. In May, they appointed a new Director, and in mid-May importers learned that they would now be expected to account for the separate materials in their mixed loads, separately. Not only that, Guangzhou Customs would be happy to help them do the work. And if that’s too much trouble, Guangzhou’s Customs officers are quite willing to make estimates for you (much more accurately than in the past). As of late June, there are two major consequences of this change in policy:

2. Containers are piling up in Guangzhou and Hong Kong (HK being a major feeder into GZ). According to my sources, there are 10,000 containers currently backed up in Guangzhou, and an additional 30,000 backed up in Hong Kong (put in perspective: according to Customs data, China imported 47,866 containers of scrap between April 4 and May 3, 2009; of those, 13, 281 were imported from Hong Kong). How long they remain backed up depends on two factors, I suppose: the patience and ability of the Guangzhou Customs District to work through this backlog; and two, whether or not Guangdong is willing to allow one of its major industries tobe crippled over tax collections during a major economic downturn.

A couple of observations on this matter.

The fact that it hasn’t garnered more attention can be ascribed to – in my opinion – the still depressed demand for raw materials in South China. Many of those idled containers were bought speculatively and/or for the purposes of stockpiling. Certainly, the need for the material isn’t as desperate as it would have been, say, at this time last year.

And finally: this, too, will pass. Over the years, the industry has witnessed several scrap-related tax declaration crackdowns in Guangzhou. Every time it happens, someone claims that “this time, it’s serious.” And every time, things are back to (ab)normal in a few months. According to my sources, there’s a wide expectation that this most recent crackdown will follow the same course. The industry is just too big down there for it to falter on one Custom District’s law-abiding whim.