American Independence Day doesn’t officially commence for another 48 hours or so, but if my blog traffic – and unanswered emails are any indication – vast swaths of the US  have already unplugged, and are unlikely to turn up again until Monday or Tuesday. Fair enough. As an American who values his own independence, I’m officially declaring myself independent of this blog until Monday Tuesday.

Unrelated, but interesting: below, an image of the rush hour ‘people-fall’ I experienced in People’s Square this afternoon. 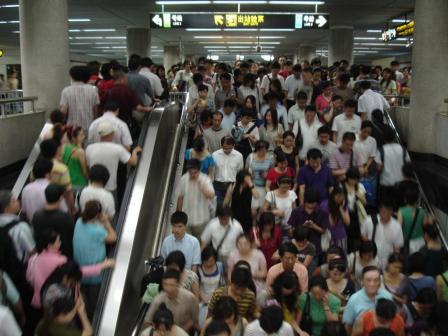 And since it’s almost the 4th of July, let’s not forget Dave Alvin’s immortal 4th of July. Regularly played over the, er, PA here at Shanghai Scrap HQ. So, heck – free ‘4th of July’ download for the first person to email the number of exits at the People’s Square station [UPDATE: okay, okay, bad contest. Change to: first person to send me an email via the contact form.][2nd UPDATE … and we have a winner. Contest over!]