A small but significant set of data points in the ongoing discussion of how – potentially – China’s economy has altered the global economy, especially as it impacts the current economic downturn.

I received this first one last week from my pal Bob Garino, Director of Commodities at the Institute of Scrap Recycling Industries [ISRI] in Washington, D.C. It tracks the relationship between (in blue) the US IP Manufacturing Index, a measure of metals intensive US manufacturing; and (in green) the CRB Metal Index, a measure of key scrap metal commodities, including copper, lead, and steel. Note that the two indices were relatively correlative until December 2008 – or right around the time that China began to stockpile key metal commodities (click for enlargement). 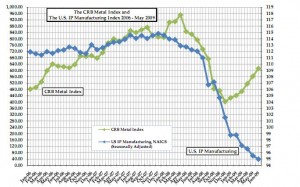 The data is interesting in its own right, but even more so when seen in the context of how the two indices behaved during the prior three recessions. Below, that data, as supplied by the ISRI Broadsheet (click for enlargement). 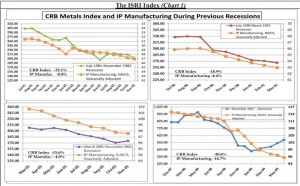 To quote Garino (my favored expert on the relationship between raw materials and the overall global economy):

“There was a close correlation between two but that relationship has sure changed, and we think it’s mostly due to Chinese buying, and not the influence of domestic [US] purchases in the manufacturing sector … [T]he concern (if there is one) is what it will take to see a return to the past relationship? Perhaps due to the nature of commodities within the context of a changing global economy, the current correlation we’re seeing between IP and the CRB has forever changed and has now become meaningless.”

And that’s the question, isn’t it? Has China overturned the realationship between commodities demand in the US, and global commodities prices? My personal opinion is that this kind of question is probably best answered during an economic expansion, and not a recession when – in the case of China – economic stimulus creates non-market demands for commodities. And despite overheated talk (from, among others, me) about the potent power of China’s economic stimulus on the price of global commodities, the actual data is less than encouraging. Below, China’s imports of scrap aluminum and copper (the latter an important component of the CRB index) from January to May 2009, as compared to the same period during 2008: