On August 28, Science, one of the world’s most prestigious scientific journals, ran a news item regarding ongoing studies of the health effects caused by environmentally unsound processing of e-waste (PCs, monitors, printers, etc) in south China [subscriber only]. in part, the opening paragraph reads:

China has been accepting vast quantities of discarded televisions, computers, printers, and other equipment from abroad since the early 1990s. E-waste processing, a burgeoning cabin industry in coastal parts of China, may end up dwarfing other examples of contamination, scientists argued at a symposium … Since 2000, the central government has prohibited importation of e-waste, and a law passed last year requires e-waste processors to register with local governments and take steps to control pollution.

A couple of factual errors aside (it’s hardly a “burgeoning” industry, and the import prohibition actually came in 2001), there’s nothing new in here that hasn’t been reported in hundreds, if not thousands of news stories and investigative reports over the last two decades. 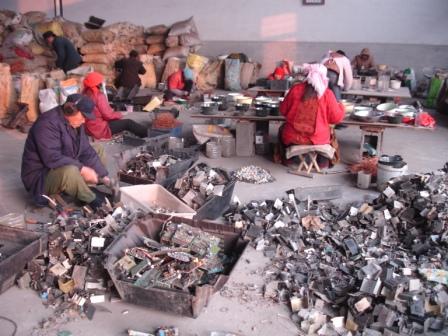 And that’s fine, to an extent: the world’s technology consumers should know the environmental and health costs of recycling their throwaways. But there’s a problem with the Science story, and those like it: they insist on blaming China’s e-waste problems on foreigners, and thus deflect attention away from the fact that Chinese e-waste is the fastest growing and largest component of the waste stream arriving in South China (and, especially, into Guiyu, the notorious e-waste processing hub). And, in doing so, publications like Science provide cover to the Chinese government officials, and the Western and Chinese consumer electronics companies who have – collectively – failed to do much of anything about the problem (for example, in 2008 Dell’s Chinese “take-back” program brought in 2800 old computers). I bring up this issue – yet again – due to a curiously candid story that ran in Friday’s Shanghai Daily.

Headlined, innocuously, “Computers for charity face problems,” it focuses on Shanghai’s first computer recycling center, and the problems that it’s encountered in obtaining computers for recycling, due to competition from the “informal” computer recycling sector ultimately responsible for sites like Guiyu. The informal sector, unlike places like the recycling center, pay cash – sometimes, lots of cash – for computers. Recycling centers sometimes pay cash, but more often than not they accept the old, still valuable computers, for free. In any case, the key sentence in the Shanghai Daily story is the second one:

Since opening last November, the center at 828 Yishan Road in Xuhui District has received about 10,000 discarded computers, meaning it only gets one in 70.

In other words: in the ten months since the recycling center has opened, roughly 690,000 discarded computers have entered China’s informal, environmentally destructive e-waste processing system – just in Shanghai. Now, to be frank, I have my doubts about the reliability of that statistic (nobody – no institution or individual – has ever done an audit of China’s domestic e-waste stream). But, even if it’s half true, that’s 350,000 waste computers (we’re not talking monitors or printers here) in less than a year – and China’s computer market is only growing. But if you read or watch any of the coverage related to China’s e-waste recycling industry from, say, the last decade, you’d be hard-pressed to learn where any of that material is going.

So I pose a question I’ve posed before: why, if China is generating such massive volumes of its own e-waste, do foreign journalists and environmental groups insist on focusing only on the imported e-waste. This is particularly pertinent in 2009, when – by all accounts (some written by me) – south China’s scrap imports of all kinds have been severely impacted by the most serious crackdown on smuggling in more than a decade. And yet, somehow, the e-waste workshops continue to thrive. My sincere hope is that future stories and investigations into this complex issue will begin to ask the very simple questions about this phenomenon, rather than parrot the same old story that’s been promoted for nearly a decade (promoted, I might add, to the benefit of those who sustain China’s destructive e-waste trade). In the interest of broadening the discussion, and in the spirit of collegiality, I offer a prospective interview question for officials in Guiyu: “If imports were totally halted, would Guiyu’s e-waste industry die?” The answer, I believe, will be instructive.

Stay tuned: I will have much, much more to say about this subject, in another forum, in the next few weeks.