Last night I was walking south on Fenyang Road when, at the intersection with Fuxing Road, I saw a small crowd of five or six people standing around a tricycle outfitted with cages packed tight with terrified cats and a few small dogs.  In front of it, a waif-like man dashed around, mostly crouched over, stirring two stainless steel pots. As I drew closer, I noticed he was chatting with a large, unwashed woman who was busy rattling a pair of metal chopsticks against a cage full of kittens, terrifying the animals [yes, from Dickens/Hell]. This would be an unusual scene anywhere in Shanghai (in my years here, I’ve never seen anything like it), but particularly so at that intersection – the affluent heart of the French Concession. I usually carry a camera with me, but last night I only had the benefit of my camera phone. So, when I thought the waif was looking elsewhere, I snapped this rough image: 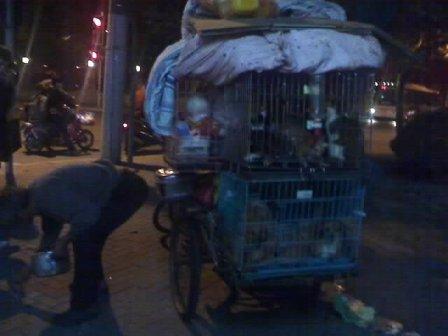 At the sound of the closing shutter, the waif (on the left side of the photo) dropped his pot and leaped at me – or, more precisely, my phone. I pulled it back and he came to a stop a hand’s distance from my face. He was taller than I thought, towering over me with eyes set so deep into his weather-beaten skull that they appeared to be in a perpetual squint. His voice was even more uncomfortable: a deep, hollow thing that reminded me of what a double-bass sounds like when a bow whispers lightly across the strings. But the metaphors came later. At that moment, my only thought was to watch for a knife or another set of metal chopsticks. I was, to put it lightly, in a bad spot.

Fortunately, there were other bystanders, and simultaneously they all began to call out: “Laowai, laowai!” [“Foreigner! Foreigner!”] It wasn’t directed at me, however, but rather at the demonic man in my face, as if to remind him that the foreigner simply doesn’t understand our ways (some truth to that), that one doesn’t take photos of this kind of thing. So he backed off, and I got out of there with a few snickers at my back, but no worse for the wear.