After several weeks of travel, and one Presidential visit, it’s time for me to buckle down and write; the deadlines loom. But before I go underwater, some items that I found interesting. 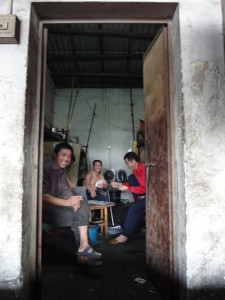 Above, an image snapped of an impromptu lunch hour card game played by workers at a Qingyuan factory a couple of weeks ago. No reason – except that I like it. Click to enlarge … and I’ll be back in a few days.